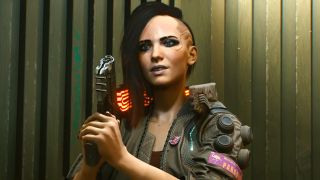 Cyberpunk 2077 is going to soak up some serious hours when it finally drops in April 2020, and according to a new interview with CD Projekt Red, we'll likely spend a lot of time finding the perfect ending. Speaking with YouTuber YongYea at E3 2019, quest director Mateusz Tomaszkiewicz confirmed that the upcoming sci-fi RPG will have multiple endings driven by the player's decisions.

We already know that a Cyberpunk 2077 no-kill pacifist run is totally doable, and you can bet peaceful play will affect the ending in some way; RPGs and immersive sims routinely tie endings to pacifism and good karma and things like that. According to Tomaskiewicz, you can also clear the game without using additional cybernetic augmentations if you want to remain a (relatively) natural human. You can't avoid some augmentations that play into the controls and HUD but, apart from those, you can get by on flesh and bone alone. There's no telling how or if your augmentations will affect your ending, but they present an interesting balancing act. Come to think of it, your relationship with the gangs of Night City could play a part too.

I'm sure Keanu Reeve's Cyberpunk 2077 character will factor into the different endings as well. Reeves plays Johnny Silverhand, who CD Projekt Red has described as something of a second protagonist. He has nearly as many lines as V, so he's sure to be a key part of the story. We'll probably wind up going for whatever ending lets us spend the most time with digitized Keanu Reeves.

We also asked CD Projekt Red if you can pet the dog in Cyberpunk 2077. It's complicated.