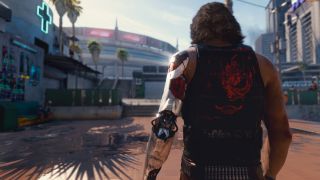 The prospect of a Cyberpunk 2077 New Game Plus Mode has been floating around pretty much ever since CD Projekt Red's upcoming RPG was announced, as a hotly fan requested feature that would allow players to relive the open world sci-fi of Cyberpunk 2077 with all of their previously acquired skills, experience, and loot.

The Witcher 3 studio has publicly teased the idea before but, in a recent all-access feature from Polish Magazine PSX Extreme (translated on Reddit), we now appear to have confirmation that a Cyberpunk 2077 New Game Plus Mode is being "worked on."

Whether that New Game Plus Mode will be available on launch day, or rolled out post-release as part of a free DLC (in the same vein as The Witcher 3), has yet to be revealed, and the article apparently offer no other information on the feature aside from confirming its existence, but that's all we need to go on for now.

The Reddit translation of PSX Extreme's report also reveals more about the relationship system of Cyberpunk 2077, which will allow players to invest into relationships with other NPCs and companions, and even romance them or, uh, engage in 'amorous congress' at the very least (or should be very most?).

Also, as if you needed any more reason to idolise Keanu Reeves as a god amongst men, the article reports that the actor - who is still performing motion capture at the studio for his role in the game as Jonny Silverhand - remembered the names of every CD Projekt Red developer when they met for the second time at E3 2019. If his character isn't able to be romanced in Cyberpunk 2077, then we might as well call it day there.

For more, discover more of the big new games of 2019 on the way, or watch the video below for the big 8 things you need to know about Cyberpunk 2077.