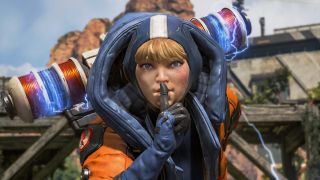 Apex Legends Rosie is the name of another character rumoured to be coming to Apex Legends. Our last legend was Crypto, who we’ve had for a little while now. With that said, Apex Legends Rosie has been teased slightly through official channels, and while she hasn't been confirmed yet, here's everything we know about Rosie in Apex Legends.

Thanks to GFINITY, we know a few different rumours circling Rosie. One of those rumours is that she was Wattson’s tutor during their time together at Kings Canyon. We know that Wattson and her father had a part in creating the games, so this is an interesting addition if proven true.

Rosie’s moves are also under speculation. She appears to have an ability set that’s dedicated to finding certain items and teleporting. Whether she’ll keep this ability set or it’ll be something else entirely when she’s revealed remains to be seen.

Who is Rosie in Apex Legends?

"L001 is moving southbound at a rate of 10 klicks per hour after a sixteen-hour rest interval. This is yet another significant rest time reduction. We suspect L001 is exhibiting signs of territorial behaviour or distress. We will continue gathering data and attempt to determine the cause."

Of course, Rosie isn't mentioned in the body of the message, but there's a post-it note attached to the side which reads: ""What's wrong with Rosie???", where Rosie is underlined three times.

There's a few theories at play here. The first is that Rosie is simply a nickname for L001, the leviathan being referred to in the data log. Leviathans are the huge monsters found on and around King's Canyon and the data log explains they're displaying erratic behaviour, which means asking what's wrong with Rosie makes perfect sense. This is backed up by Respawn community manager Jay Frechette mentioning on Reddit that "she never listens to me" when asked about if he moved Rosie in a patch.

The other theory is that Rosie is the name of a new legend coming to the game, and it's the idea I'm much more fond of. If you read the post-it note as if it was addressed to someone else who'd be reading the data log rather than the subject of the log itself, it's another viable theory, especially since Rosie is underlined so much.

This is backed up by a leak from all the way back in March, which had the identities of 10 potential future characters in Apex Legends. Two will look very familiar now, because Octane and Wattson have since been added to the game, with Crypto being the likely third addition. This means the leak has some credibility behind it, and Rosie could well be the fourth new character once Crypto is introduced.

There's no word on what Rosie's abilities could entail, but since there's a good chance she's a researcher or scientist, expect her to be more of a support character since she's likely not a battle hardened competitor like most of the legends.

As soon as we know more about Rosie in Apex Legends we'll keep you updated so until then, keep your eyes peeled!