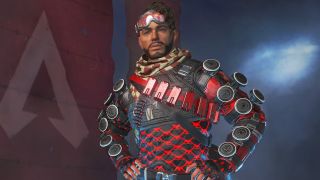 You need to spend some hard earned Legend tokens on unlocking Apex Legends Mirage, but when you do, you can focus on bamboozling your enemies to your heart's content. His abilities allow him to send out decoy characters of himself to fool opponents but he can often be tricky to use for Apex Legends players, and some consider Mirage underpowered. If you want to give this trickster a shot though, read on for our Apex Legends Mirage guide.

We've also got an overview of all the best Apex Legends characters, along with detailed guides for each one individually below.

Every Legend in Apex Legends has three abilities; a passive, tactical, and ultimate. Mirage's passive, named "Encore!", is easily the weakest of his three abilities, rarely finding itself useful, since all it does is send out a decoy when you go down and turn Mirage invisible for a short while. Unless you're in the middle of a chaotic firefight and there's multiple players all around you, enemies will usually just wait for you to become visible again before finishing you off.

When it comes to Mirage's tactical, "Psyche Out", you have some serious power at your fingertips if you use it correctly. This sends out a holographic decoy in the direction you're aiming, who will only stop if there's an obstacle in his path. When used in the middle of a fight, this decoy can provide the perfect opportunity to shoot at enemies as they're confused by the imaginary man. If they don't see you send him on his way, it will almost always do the trick for a few seconds.

"Vanishing Act", the Mirage ultimate, is very hit and miss. The first few times you use it you'll probably be underwhelmed; a bunch of decoys run out and you become invisible, but then they simply stand still a few feet in front of you. As ultimates go, it's not great, but there's a trick to it. If you deploy the Mirage ultimate while on a ledge - as long as some of the decoys drop down - they will continue running just like the "Psyche Out" decoy.

How to play Mirage in Apex Legends - Tips & tricks

With all that said, here are a few key tips on how to use Mirage in Apex Legends and make the most out of his abilities.

How does the Mirage hitbox compare to other Legends?

One other aspect you have to take into consideration when using Mirage in Apex Legends is the size of his hitbox. We go into much more detail in our Apex Legends hitboxes guide, but for Mirage specifically, he's in the middle of the park. Mirage is exactly the same size as Bangalore, which is bigger than Wraith, Lifeline, and Bloodhound, but smaller than Pathfinder, Caustic, and Gibraltar. If you want to play a super small character than Mirage isn't the one, but he's not oversized either.

As an addendum, if you recognise Mirage's voice from somewhere, we may be able to shed some light as to why. Roger Craig Smith is the man behind the decoy-fuelled deviant, and he's previously voiced Ezio Auditore da Firenze in Assassin's Creed, Chris Redfield in Resident Evil, and most importantly, he's the current voice of Sonic the Hedgehog. Gotta go fast!

Mirage is one of our favourite Legends in the game due to his ability to trick other players, so go out there and start bamboozling!