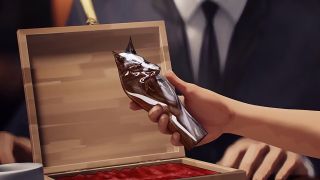 The Apex Legends Loba mystery is spinning back up, and this time we have a true Big-Foot-style cryptid situation on our hands.

Player reports are surfacing that indicate a dog or wolf has been spotted roaming around the map and making generally doggish sounds. This wouldn't necessarily mean much on its own - it stands to reason that somebody who lives in World's End could've accidentally let their pooch loose. But it lines up with larger hints that players believe are pointing toward a new character, Apex Legends Rosie.

First, check out this gameplay footage from Reddit user SheeplessWolf. Uncannily appropriate user name aside, it does look like some kind of four-legged creature could be loping along the walkway in the distance.

I swear to god I saw a dog running around in APEX. I did the best slowmo job I could do. Please someone confirm this. When we went to investigate there was no one up top other than a solo Bangalore hiding. from r/apexlegends

Or is that just a Wraith Naruto-running with her scarf billowing out behind her? That2LstarGuy, who has become known for leaks and data mining in the community, took a closer look. They're pretty sure that isn't the case, but there's only so much you can do with a small clump of moving pixels.

So I slowed down only the zoomed in part even more and I'm pretty sure that's not a Wraith or Revenant crouch walking. Your thoughts? pic.twitter.com/icdPrunv5KFebruary 11, 2020

Draw your own conclusions about the video, but a number of responses to the Reddit thread aligned on another detail: it sounds like there are canine barks, growls, and howl noises popping up in multiple parts of the map. Next time you drop into World's Edge, turn up the volume a little and see if you can hear anything yourself.

All of this could point toward Rosie actually being a new character named Loba - or maybe her dog is named Loba, or vice versa. The little girl in the Apex Legends Revenant story trailer got a little wolf statue from her dad before Revenant killed him, so fans are speculating that may set up Apex Legends' first canine-centric legend. Well, there's Bloodhound but… no, they don't actually have a dog, so they don't count.

Celebrate with your sweetest duos partner in the Apex Legends Valentine's Day Rendezvous.