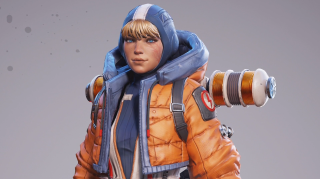 Apex Legends Wattson was officially confirmed by EA during E3 2019. We love her so much that it hertz. Because you know, electricity? Ahem. She’s more of a defensive Legend, but don’t let that fool you into thinking she’s easy to get around. Her electric fences can stop you in your tracks so for more information on Apex Legends Wattson, read on.

Wattson's abilities are all about electrifying enemies. Her tactical ability introduces nodes that can be placed to create an electric barrier, guarding any area you please. Whether you want to protect a house you're taking refuge in, block an enemies route into the safe zone, or simply place them randomly as obstacles to hinder anyone chasing you. Up to 12 nodes can be placed down at a time, so you can create some seriously big electric fences. It's not confirmed whether the fences actually damages enemies or simply knocks them back, but they'll temporarily shut down for any teammates that want to pass through them.

Alongside the electric fence is Wattson's ultimate, a projectile defence system that will destroy any incoming projectiles like grenades or missiles from Gibraltar's ultimate. It's essentially the same as a Trophy System from Call of Duty and if you're close enough to it when it's placed down, you'll regenerate your tactical ability at a much faster rate.

Combine both of these with Wattson's passive, and you're a force to be reckoned with. Her passive ability boosts the power of Ultimate Accelerants, making them instantly restore your ultimate to 100%, so it actually makes them worth holding on to until you can stack them.

When we finally get our hands on Wattson, we'll update this guide with more information including tips and tricks for playing as this electrifying legend. Until then, keep on slaying and learning the map ready for when Wattson is introduced!