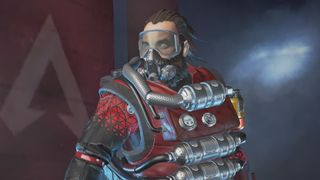 We've also got an overview of all the best Apex Legends characters, along with detailed guides for each one individually below.

As with all Legends, Caustic has three abilities; a passive, tactical, and ultimate. Usually we'd look at the passive first, but that only works with his other two abilities, so let's start with the tactical.

Nox Gas Trap is the name of Caustic's tactical ability, and it's quite self-explanatory as to how it works. You can throw down up to six gas canisters that trigger when enemies are close enough to it. Noxious gas is then emitted, dealing four damage per tick to any enemies inside the gas. These are great when placed behind doors or inside rooms, but they can also be destroyed by enemies if they shoot the very bottom red panel.

As for Caustic's ultimate, it's very similar to his tactical, but instead it's a Nox Gas Grenade. The gas does the same effect, but it covers a larger area and can be thrown further. The animation takes a while to complete and it still can't be lobbed as far as a standard grenade though, so it's very situational.

What about Caustic's passive? That's easy; Caustic automatically gains Nox Vision, which means any enemies inside his noxious gas have an outline. It's very hit and miss though because if you can trap enemies inside a room full of gas, they don't stand a chance... but setting that up is not easy. As soon as someone is caught in the toxic gas, their instant reaction is to flee for a way out.

One aspect that isn't mentioned with Caustic however is that while the gas only damages enemies, it still slows down and blinds teammates. You also need to be careful with gas trap placement to ensure you don't block teammates' paths. Caustic is great in close quarters combat - especially at Bunker - but otherwise, he's a tough Legend to get the hang of.

How to play Caustic in Apex Legends - Tips & tricks

How does the Caustic hitbox compare to other Legends?

Right now, Caustic has one of the largest hitboxes in the game, which makes him an easy target. The only bigger hitbox is Gibraltar, but he has a gun shield and is a much more defensive character to counteract that. Worry not though, because Respawn has confirmed that Caustic's hitbox - along with Pathfinder and Gibraltar - will be reduced when Season One of the Apex Legends battle pass launches later this month. We go into more detail on this in our Apex Legends hitboxes guide, but for now be aware that Caustic is a thicc boi.

JB Blanc is the voice actor for Caustic, and the one behind all those evil voice lines. If you recognise him, that may be because he also voices Commander Blisk in Titanfall 2, Bane in Batman: Arkham Origins, Moneybags in Spyro Reignited Trilogy, and Diablo in Diablo 3.

When you get the hang of utilising Caustic's traps, he can become a seriously powerful Legend, but you'll need to practice with him first. Good luck!