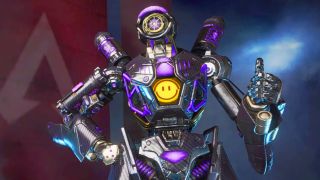 With big shooter games there can be questions around hitboxes - aka the area on a character to shoot that counts as damaging them. And despite the fact that some characters may vary in size, most modern shooters tend to stick with identical hitboxes no matter what your character looks like to keep things fair. However, the Apex Legends hitboxes don't quite work that way.

There are eight Legends available to choose from at the start of the game and some are quite clearly much larger than others, or in Pathfinder's case, smaller. But which Apex Legends characters have the smallest hitboxes?

What is an Apex Legends hitbox?

To delve into this, we'll first have to explain exactly what a hitbox is. To put it simply, a hitbox is the area of a character that you need to shoot to deal damage. In games like Fortnite, a character's hitbox is always the same no matter the skin they wear. That can sometimes mean bullets deal damage, even if they're not hitting the actual character model when you look closely. It's intended to keep things fair, and not give someone an advantage or disadvantage depending on the skin they choose.

However, the Apex Legends hitboxes are truer to the real size of the character - or at least they're supposed to be. Playing as someone like Gibraltar means you're a bigger target for enemies, while playing someone like Wraith means you're harder to hit.

Although, from the looks of a video recently surfaced on the Apex Legends subreddit, Pathfinder the android, despite being the most slender character actually has quite a large hitbox. If you shoot slightly to the side of Pathfinder, the bullets will still connect, which doesn't seem entirely fair. The video compares Pathfinder to Bloodhound, the tracker who can follow footsteps. While Bloodhound's hitbox is visibly very true to the character model's boundaries, Pathfinder's isn't, which feels like quite the anomaly.

Having different size hitboxes for the various Legends makes sense, because it's simply another aspect you have to consider when working out which Legend you want to play. Gibraltar's hitbox is by far the biggest, but that's because he is the most tank-like character and he can deploy two different types of shield; the one on his gun when aiming down the sights, and his bubble shield.

Respawn community manager Jay Frechette responded to the concerns of the community by confirming that the team are "definitely aware of it" and that they were discussing it at the end of last week. There's no further news than that yet, but it's good to know that Respawn has recognised the often inconsistent hitboxes.

Which Apex Legends hitboxes are the smallest?

The confirmed Apex Legends hitboxes are as follows, from smallest to largest:

From this, we know that Wraith has the smallest hitbox by some margin. At the other end of the scale, Gibraltar is 140% larger than Wraith. One Reddit user even discovered that Wraith is so small, she can hang and peek over walls without exposing much of her body at all.

However, this information has an expiration date. In the upcoming Apex Legends battle pass and the start of Season One, Respawn has confirmed that the hitbox sizes for Gibraltar, Caustic, and Pathfinder will be reduced. The exact adjustments haven't been confirmed, but they've said they'll be keeping an eye on it and more adjustments could come during Season One.

Credit to Reddit user Tractal for the information on individual hitbox sizes.