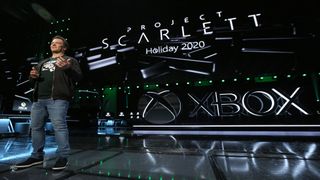 Earlier this year, rumors suggested Microsoft would announce two new Xbox consoles at E3 2019. The disc-less Xbox One S All-Digital Edition was shown in May, and Xbox Series X was unveiled at E3 as expected, but given the previous rumors and an old statement from Xbox boss Phil Spencer regarding "game consoles", many folks were still wondering if the Scarlett family will include multiple systems. In a new interview with Business Insider, Spencer confirmed that Project Scarlett is the company's only next-gen console at this point in time.

"Last year we said consoles, and we’ve shipped a console and we’ve now detailed another console. I think that’s plural," Spencer said. He also stressed that "we’re focused on Project Scarlett and what we put on stage.”

So if you were worried that Xbox Project Scarlett would be as complicated as the family of Xbox One consoles - standard, S, X, and now All-Digital - put those worries to bed for now. Yes, both the rumors and Spencer were referring to the Xbox One S All-Digital Edition. For now, Microsoft is just working on one flagship next-gen console. You can bet we'll see at least one more line of Scarlett systems after launch - the equivalent to the Xbox One X - but that's probably a question for 2021 at the earliest.

Beyond a single Scarlett system, Microsoft is also working to build one cohesive Xbox library: Xbox Series X backwards compatibility will support games from every Xbox generation as well as Xbox One hardware. According to the current Xbox Project Scarlett launch date, this will all kick off in holiday 2020.

Yes, Xbox Project Scarlett will have a disc drive.