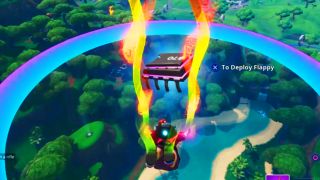 Keep your fingers crossed for a battle bus flight path that crosses Lazy Lagoon, because that's where you need to dive out to find Fortnite Fortbyte 70. If not, make sure you deploy your glider at the closest point and float over till you can skydive down through the rings. As long as you've got the Vibrant contrail equipped, there should be four multicoloured rings to dive through. They gradually get smaller as you plummet towards the ground but they're not too difficult to hit; as soon as you pass through the fourth consecutive ring the Fortbyte should be collected.

If you're just finding out about Fortnite Fortbytes then I'm so sorry, it's probably already too late. A new Fortbyte appears on the map every day in Fortnite and there are 100 in total. You can only gather these collectible computer chips during Fortnite Season 9 for an as yet unexplained reward, so the FOMO of not getting them all before Fortnite Season 10 starts is strong. As you slowly gather them all an image is being revealed that presumably is a clue either to the prize you'll earn, or the future of Fortnite. Maybe both.

How you get each one varies. Some are collected simply by playing - through XP landmarks or reaching certain Battle Pass Tiers - others require you jump through hoops. Not literally (yet) but rather go to certain locations to find them and occasionally wear outfits or perform actions to activate the Fortbyte you find there. Here's all the Fortnite Fortbyte's we have so far, with links to how to unlock previous ones.

Here's where we'll list all the Fortnite Fortbyte Challenges as they go live. If you have to go anywhere or perform any additional steps you'll be able to click the link to see more, otherwise it'll just be a case of hitting XP, Tiers, wins and so on.