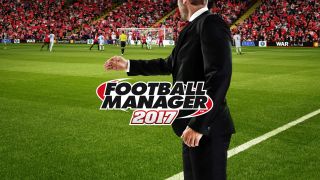 It's the news that budding Big Sams/Joses/Pardews have spent the summer gnawing at their fingertips for: Football Manager 2017 is coming on November 4. (Budding Pardews, though? Rather you than me. And I'm a Palace fan.)

Developed (as ever) by Sports Interactive, the game is coming to PC, Mac, and Linux, and those who buy it will get a copy of FM Touch 2017 free of charge. FM Touch distils the game down to the classic essentials from the Champ Man era: matches, tactics, training, and fists thumped through walls when you concede a last minute winner.

All pre-orders come with four DLC elements for FM Touch which enable you to fiddle with the overall parameters of the game: 'no firing', 'board override', 'all job applications', and 'national management'.

Select retailers are also offering beta access for full-fat Football Manager 2017, so be sure to check whether this is included before you commit to pre-ordering. Beta access begins two weeks before the game proper comes out, and enables you to carry over your save.

Feature-sets for both versions of the game will be unveiled nearer to release.

To recap: Football Manager 2017 is released for PC, Mac, and Linux on November 4.