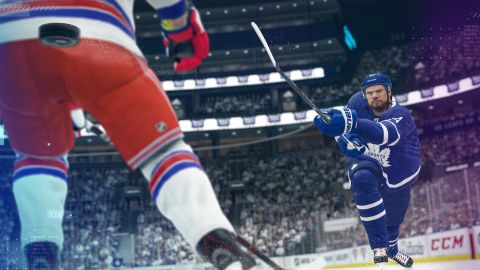 NHL 20 again leads the way for pro sports on PS4 and Xbox One, strengthened this year by shooting improvements and presentation upgrades.

You’d have been forgiven for feeling slightly underwhelmed when the NHL 20 reveal trailer emerged back in June. It all but confirmed the series was to avoid EA’s Frostbite Engine for yet another year – something FIFA and Madden transitioned to years ago – while a perceived lack of major new features hinted at a potentially quiet outing for the series.

Turns out all that worry was for nothing. NHL 20’s subtle new features and enhancements add up to another formidable effort from the most consistent series in sports gaming, boasting refined gameplay both on and off the ice, as well as an overhauled presentation suite that injects a renewed sense of identity.

The most prominent change this year relates to shooting. Everything from slapshots to one-timers benefit from a more responsive feel – the result of various new animations, as well as improvements to the game’s motion tech. There’s an increased focus on improving fluidity across the board, with aspects such as skating and puck pickups benefiting from increased smoothness, resulting in the potential for some seriously ambitious offensive plays.

These upgrades are even more evident when the NHL’s top stars get involved. The likes of Toronto’s Auston Matthews are consistent at pulling off sharp wristers with incredible accuracy, while Alex Ovechkin can fire booming slapshots by dropping to a knee. Various unique shooting animations are scattered throughout the game, helping to provide key players with a true sense of individuality, and making them more enjoyable to use on the whole.

Even goalies get an upgrade this year, although they remain prone to the odd blunder. It seems we’ll never get away from slow, looping deflections and awkward own goals, but the AI at least finds more ways to combat them this time around. This is largely due to hundreds of new animations, including fresh methods of covering the puck, along with better reactions to rebounds. There’s still more work to be done, but these are definite improvements.

When everything’s firing, NHL 20 brims with authenticity. You’re challenged to utilise smart, creative hockey in order to carve open space, and power plays feel more important than usual due to the new offensive tools at your disposal. Balance tweaks to both stick and body checking force you to apply a realistic brand of defense in which positioning takes precedence, while the ability to cut out shooting lanes proves more critical than ever.

EA Canada’s puck-slapping series has been crying out for an overhauled presentation suite for years now, and finally receives some major changes in NHL 20. Replacing the old pairing of Doc Emerick and Eddie Olczyk in the announcer booth are James Cybulski and Ray Ferraro, with the two adopting an intense style of drama-filled commentary. Chemistry between the pair is reasonable, and Cybulski’s passionate delivery, though occasionally a bit excessive, helps to generate a big-game feel.

You can forget the NBC-style presentation of old, too – it’s been replaced with a more generic, but visually pleasing, set of colourful overlays. This includes a new dynamic scoreboard, which somewhat controversially sits at the bottom of the screen, but proves easy to get used to. The majority of these graphical tweaks simply prioritise an alternative style rather than offering any major new additions, but nevertheless do a worthy job of freshening up the series visually.

An exception to the rule is a brilliant new feature called Play of the Game (and Period), in which key goals, huge hits, and big saves are highlighted with an elegant super slo-mo replay. This might be a minor addition in the grand scheme of things, but it definitely gets the banter flowing, particularly when watching your teammate get clobbered with a huge bodycheck. It’s the sort of highlight reel feature NHL lacked for far too long, and proves a welcome side-attraction.

Back to full strength

As is traditional, you can take to the ice in an extensive number of ways. The World of Chel returns after successfully debuting in NHL 19, and proves a highlight once more, featuring new battle-royale style formats for its Ones and Threes modes. They’re still the same premise as last year - win four consecutive games to be crowned champ - but now feel like more of a competitive tournament, more effectively ramping up the tension of each round.

There are also upgrades to Hockey Ultimate Team, which benefits from FIFA’s popular Squad Battles mode for the first time, while Franchise Mode feels like a considerable upgrade, implementing various new features and tweaks. The game-changer among these is coaches, whose specific specialties and schemes now have a major impact on things like line chemistry, requiring you to think more carefully about the players you sign and staff you hire.

The odd disappointment still lingers, with Be a Pro’s continued stagnation proving the worst culprit. Even so, the significant amount of new and improved content is sure to keep series veterans busy. Casuals remain well catered to as well, with Ones Now finally enabling you to go offline with the popular pond hockey mode from last year. You can even suit up as the nightmare-inducing Philadelphia Flyers mascot Gritty in Threes, which almost merits a purchase on its own.

Not a milestone edition then, but even so this plays a more free-flowing style of hockey than ever before, bolstered by improvements to both skating and shooting – and the removal of the series’ dated NBC presentation feels like a breath of icy-fresh air. The looming presence of a new generation suggests more substantial changes must be on the way but until then, NHL 20 serves as a worthy culmination of the past few years.

NHL 20 again leads the way for pro sports on PS4 and Xbox One, strengthened this year by shooting improvements and presentation upgrades.