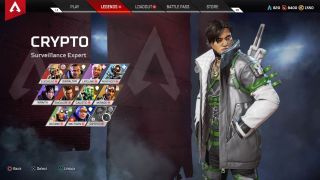 Apex Legends Crypto released alongside Season 3 on October 1, 2019. He is the third character to be added to Apex Legends, joining speed demon Octane and electrical Wattson in an already jam-packed roster of Legends. If you thought Bloodhound was great at letting your team know where the enemy is, then you’ll be amazed to know that Apex Legends Crypto is 100x better at doing just that.

If you're trying to work out which are the best Apex Legends characters, we've got detailed guides for each one individually below.

If Crypto had a middle name, it most certainly would be ‘recon’. With him around, your team is in a good position to know where the enemy is. His Surveillance Drone is also his tactical ability, which can be deployed and flown up to 200 meters away from Crypto. This can leave Crypto vulnerable if done incorrectly, or if your team is nowhere to be seen, but can be useful in exploring supply bins, buildings and even pinging enemy locations.

What makes his recon abilities so much more powerful than Bloodhound’s is Crypto’s passive, Neurolink. With Neurolink, Crypto’s team is able to see every little thing that the surveillance drone pings, giving your team the advantage in fights if the enemy tries to lose line of sight.

As for Crypto’s ultimate, Drone EMP, it’s exactly what it sounds. Using your Drone, Crypto is able to charge his Drone to unleash a shockwave of energy that deals 50 shield damage, disables traps and slows players down. The only downside to this is that Crypto’s Drone is very loud and can be shot down, so you’ll have to use it carefully. It’s situational, but if used correctly, it can be deadly for enemy teams.

How to play Crypto in Apex Legends - Tips and Tricks

How does Crypto’s hitbox compare to other Legends?

Crypto’s hitbox isn’t as big as Gibraltar’s or Caustic’s, but neither is it as small as Wraith’s or Lifeline’s. His hitbox is around about the same size as Mirage’s and Bangalore’s, meaning he doesn’t have the passive of Fortified or Low Profile.

Johnny Young is the voice behind the mysterious hacker, Crypto. Young has appeared in a few video games, such as Overwatch’s Dae-Hyun and World War Z’s Sho, but is a more prominent feature in TV series’ and movies like Ayla and Everyday Lies.

Check out Crypto, just make sure that your security software is up to scratch first. Better safe than sorry!