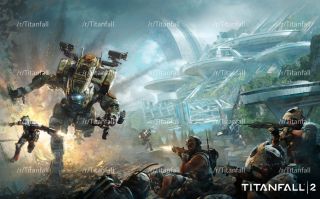 It doesn't seem to matter how far technology advances, we still need a good grappling hook. That's if a stack of leaked Titanfall 2 info is to be believed. Revealed in a now deleted Redditpost, grappling hooks will apparently let us jump into our Titans for some free-running action and pull enemies out of the air. Maps too will apparently be increasing in size for the franchise's first multi platform release.

The post also said that the release date should be around October, making the pre-Christmas slate even more exciting given Battlefield 1 and Call Of Duty Infinite Warfare's releases around the same time. The above art is allegedly part of the box art for the game and there'll be a pre-order bonus of a handgun called the Violator. Obviously take all of this with a dose of healthy speculation but such specific details and the fact that it's now magically all disappeared suggest that it's probably pretty accurate. I expect we'll get more at E3 next month.