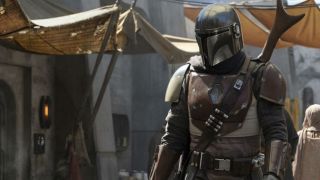 Following on from the success of its first series, showrunner and executive producer Jon Favreau has now confirmed on Twitter that the second season Disney’s The Mandalorian will debut sometime in Fall 2020.

The release date was announced in the wake of season one’s finale that went live yesterday, with the only other thing accompanying Favreau’s post being an image of what seems to be a pig-like creature, reminiscent of the species seen in Return of the Jedi. Will this figure play an important role in The Mandalorian’s upcoming second season? Thankfully, we don’t have to wait long to find out.

News that a second series of the hit Disney Plus show was happening had been public knowledge for a while now, as production has already been well underway with Pedro Pascal confirmed to return. It is, however, reaffirming to learn that the adventures of mysterious Mando and Baby Yoda will continue only a year after the first season.

The Fall 2020 release date does also mean that the show will be openly available to more territories by the time it reappears, with Disney Plus due to roll out across the likes of the United Kingdom, France and more European countries by March 2020. Couple The Mandalorian season 2’s arrival with the premiere of The Falcon and Winter Soldier, which is also releasing in the Fall, and the end of 2020 is set to be jam-packed for the new streaming service.