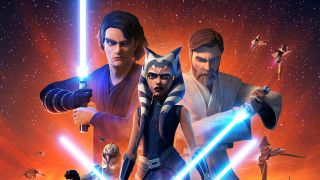 The final season of what is arguably the best Star Wars animated show is just a few weeks away, so knowing how to watch Star Wars: The Clone Wars online suddenly seems like a good idea.

It's not difficult to get hold of; every episode so far is available exclusively on Disney Plus, and the upcoming finale (which now has a late February release date) will be joining them. Basically, all you need is a Disney Plus sign-up to get started. And if you're wary of signing on the dotted line? Not to worry, a Disney Plus free trial is available to help you test the waters.

So, to summarise: short of grabbing pricey DVD or Blu-ray boxsets, you'll need to grab Disney's new streaming service if you want to watch Star Wars: The Clone Wars. Fortunately for us, the average Disney Plus price isn't all too unreasonable. You can see for yourself below.

In a part of the world that doesn't have Disney Plus yet? Don't panic, we've got some handy tips for you - especially if you want to know how to watch The Mandalorian or how to watch The Simpsons online as well.

How to watch Star Wars: The Clone Wars online - US

Disney Plus | $6.99 per month
Disney Plus is the only place you can watch The Clone Wars, and this offer is the cheapest way to do it.
View Deal

Based in the US? Getting hold of Star Wars: The Clone Wars isn't difficult - all you need is a Disney Plus membership. You'll find every episode there, including the final season when it airs in February. At just $6.99 per month, it's not unreasonable value for money either.

There is an alternative Disney Plus deal, too; you can pick up a bundle that gets you Disney Plus, Hulu, and ESPN+ for just $12.99 per month. It's also packed with loads of content to keep you busy beyond a galaxy far, far away.

How to watch Star Wars: The Clone Wars online - UK

Disney Plus | £5.99 per month
Watch The Clone Wars online with this entry-level deal for Disney Plus - you won't find the show anywhere else as of March.
View Deal

The Clone Wars is available exclusively on Disney Plus in the UK, up to and including the new season - or it will be, at least. We'll just need to be patient; Disney Plus doesn't launch officially in the UK until March 24. But hey, at least there's a silver lining in all this. Namely, the Disney Plus UK price is much lower than anticipated at £5.99 per month or £59.99 for a year.

How to watch Star Wars: The Clone Wars online anywhere else

Watch Disney Plus in your area
If your country has Disney Plus, you can tune into every single episode with this deal. If not, you'll be needing a VPN (see below).
View Deal

Got Disney Plus in your area? Watching The Clone Wars is as easy as grabbing a membership. But if you don't have access to it, either because it's not out in your region or due to you going on holiday overseas, a VPN (or 'Virtual Private Network') would be your best bet. These clever systems hide your location from the web for security reasons - no-one is able to track your data or pilfer your details - but they also allow you to overcome geo-blocking. This is a process whereby certain regions aren't allowed to access content, which is obviously a pain if you're on your vacation and aren't able to access streaming services due to them being blocked in that part of the world.

With that in mind, we've listed our favorite VPN service below, ExpressVPN. For a broader range, mosey on over to our guide to the best VPN for Netflix. This a decent time to take a look at Express VPN though as there's a superb offer on where you can get an additional three months FREE on a 12-month package and save 49% (shorter packages are available too).

ExpressVPN works on a massive range of devices like laptops, MacBooks, Amazon Fire TV Stick, Apple TV, iPhone, Android mobiles and more. ExpressVPN is also offering a 30-day money-back guarantee, which is great if you change your mind and decide the VPN isn't for you.