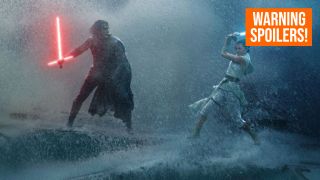 Star Wars: The Rise of Skywalker has finally reached cinemas, and the fandom is unsurprisingly divided. While some people adore the new movie, others are disappointed by the final instalment in the Skywalker saga.

Whether you're angry or overjoyed by Episode 9, director J.J. Abrams believes you're right. "I would say that they’re right,” the filmmaker told Vanity Fair when asked whether those people unhappy with The Rise of Skywalker were not understanding something. “The people who love it more than anything are also right.”

Talking at a Q&A following a screening of the movie, Abrams commented further on the mixed reaction. He said: "I was asked just seven hours ago in another country, ‘So how do you go about pleasing everyone?’ I was like’ What…?’ Not to say that that’s what anyone should try to do anyway, but how would one go about it? Especially with Star Wars.

“We knew starting this that any decision we made — a design decision, a musical decision, a narrative decision — would please someone and infuriate someone else,” Abrams said. “And they’re all right.”

Warning, the following contains Abrams' thoughts on The Last Jedi and contains major The Rise of Skywalker spoilers.

Some fans have questioned whether Star Wars: The Rise of Skywalker was an attempt to undo the story told in Rian Johnson's The Last Jedi. One major sticking point has been Rey's parents, who were revealed to be "nobodies" in Episode 8. However, Rise of Skywalker went one step further and explained how Rey's grandfather was actually the dastardly Emperor Palpatine.

Abrams denies this an attempt to "retcon" The Last Jedi. “It would be a much more interesting answer if there were conflict,” he said. “The truth is when I was getting [The Force Awakens] up and running, I was nothing but grateful that a director and writer I admire as much as Rian was coming in to do [the next one.] Not expecting to come back to this, it was just fun to watch what was happening and get to respond to it.”

Abrams went on to praise Luke Skywalker's story arc in The Last Jedi, calling it "a beautiful thing", and said that Johson acted as a story consultant on The Rise of Skywalker. “We had conversations with Rian at the beginning. It’s been nothing but collaborative,” Abrams said. “The perspective that, at least personally, I got from stepping away from it and seeing what Rian did, strangely gave us opportunities that would never have been there, because of course he made choices no one else would have made.”

“In a way it felt kind of like a gift, though of course there were challenges in every direction,” Abrams said. “It was actually weirdly more helpful than not, having that other energy to the story. There was an alchemy because of the things that he did.”

Whatever the case, there's no denying that pleasing everyone – both those who hated The Last Jedi, and loved Episode 8 – would have been an almost impossible task.