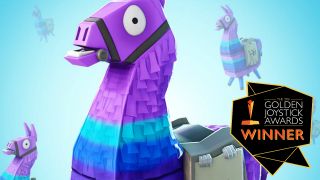 Fortnite is the Golden Joystick Award 2019’s Esports Game of the Year, defeating some of the giants of competitive gaming to be named this year’s winner.

These days, it’s pretty hard to be an online multiplayer game without factoring in esports somewhere along the way. What makes Fortnite’s win quite so impressive is the competition it saw off to be awarded the title. Fellow nominee Overwatch was developed by Blizzard, the company that helped pioneer esports with the StarCraft, while elsewhere, the direct predecessors of challengers like Counter-Strike: Global Offensive and Super Smash Bros Ultimate shaped the way we think about competitive gaming.

For many of the nominees for the Golden Joystick Award 2019’s Esports Game of the Year, developing a thriving professional community is a process that took years to nail down. This year’s winner, however, found a way to get it right on the very first try.

In a little less than two years, Fortnite has grown from its humble beginnings in an emerging genre to a world-spanning battle royale phenomenon. Somehow, developer Epic Games managed to match the game’s meteoric rise with the creation of an equally impressive esports scene. A grueling qualification process culminated in this summer’s inaugural Fortnite World Cup in New York City.

Not just a spectacle, the tournament drew in more than two million viewers at its peak and offered a prize pool which - at $30 million - was the biggest in esports history. Fortnite’s success proves that while esports’ old guard might still be a central part of the scene, it’s never too late for an up-and-coming title to make its mark.

Here's the full list of The Golden Joystick's nominees for 2019's Esports Game of the Year.