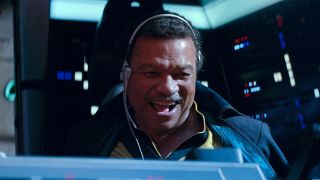 Star Wars: The Rise of Skywalker has blasted into cinemas around the world, and we still have plenty of questions. While J.J. Abrams has already begun answering a few of them (such as what Finn wanted to say to Rey), it has been left to the Star Wars: The Rise of Skywalker companion book to fill in a couple more details, one of which could result in a huge twist for Lando Calrissian. But first...

SPOILER WARNING! Do not read on unless you have seen Star Wars: The Rise of Skywalker – we are going into major spoiler territory.

During the movie's final celebration, after the victory at Exegol, the former Stormtrooper Jannah (newcomer Naomi Ackie) goes to Lando. The smuggler then asks where Jannah is from, to which she says, “I do not know”. Lando replies: “Let’s find out.”

Before Star Wars: The Rise of Skywalker reached cinemas, there were initially rumours that the pair could be related – Jannah perhaps being Lando's daughter. And while that seems unlikely considering the size of the galaxy, the official Episode 9 companion guide offers some information that could link the two.

As per Entertainment Weekly, the book reads: “When peace reigned, [Lando] attempted to start a family, but tragedy struck and his infant daughter vanished. It was only later that it became clear who the culprits behind the abduction were: the First Order, building their fighting forces but also specifically striking out at the old Alliance leadership.”

Could Jannah be Lando's long-lost daughter? That may seem like coincidence, but this small snippet of information implies that they very well could be related after all.

According to the official timeline, Lando's daughter would be 21 years old. Now, Ackie is 28 years old, which puts her seven years out. Of course, Hollywood has never been shy of casting actors to play characters who are much younger.

Hopefully, Lando and Jannah are not actually related, and this is simply the rogue being nice to a lost woman who has just fought the Final Order. Now that we know this about Lando, it gives the scene slightly more resonance – she probably reminds Lando of his daughter, and he could be the surrogate father she never had. Maybe, just maybe, we'll be seeing that bond played out in a Disney Plus series.