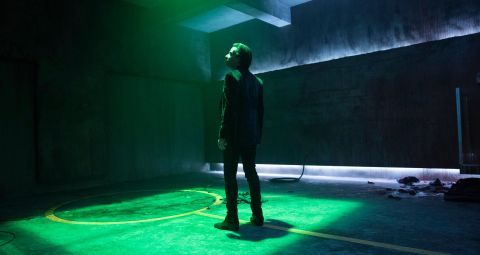 Potential is a bastard. It’s near impossible to completely fulfill, but still an aching disappointment when it inevitably seems to falls short: a promise never kept.

As a grungey two-piece thrashes out a tribute to River Phoenix, reintroducing us to the plaid delights of Flashback 1994, it’s a timely reminder of what it is to be capable of so much and not deliver. And as Powers comes in for half-time on season one, it’s certainly been a frustrating score-draw so far – letting in as many as it thumps in the back of the net – but at least it comes in for orange segments on a strong footing.

"Paint It Black" is the most satisfying episode of Powers so far, thanks largely due to its narrow focus: the Christian Walker-Wolfe ruckus dominates the 40 minutes, quickly picking up momentum after last week’s uncertain encounter.

This is fleshed out by the gory flashbacks to ’94, where we see the key event in their recent histories unfold – the massacre at the Sanction Lounge (Wolfe evidently doesn’t think much of the Grunge Stripes’ memorial to River) – and makes the battle between them more intimate. Wolfe can’t do his usual gut-shredding act as Walker has taken Johnny Royalle’s designer drug Sway – in reality a little bit of Wolfe himself – which somehow blocks his old mentor. This connection not only lets Walker explore Wolfe’s disturbed brain-space but also reclaim the powers that were stolen from him, before flinging Wolfe into the Drainer with a super-flourish.

Of course, Walker has a little help. Both iron man Trip Hammer, new-hero-on-block Zora and the legendary Retro Girl steam into the flight. They’re gleefully bloody knuckled dust ups – especially Wolfe’s disassembling of Trip Hammer – and the iffy hero effects that have previously tripped up the show aren’t in evidence here (though Walker’s slo-mo power up is still a little clunky).

All the episode’s other action is tied directly to the events in the Shaft: new Power Zora’s halting introduction to the public, the power-sapping Drainer’s big reveal to the public (and the suspicious Powers), the weird side effects of Sway, even Calista and Krispin are watching it on the news as the latter’s helpless fury against the Powers is beginning to crystallise into something potentially more menacing: all of which point to an interesting second half… potentially.

Fight Of The Week

Loving the Wolf-Trip Hammer dust-up and its strong-armed conclusion.

It also helps that this week takes a complete pass on the show’s perennial Kryptonite (or Drainer), the tedious, poorly-acted out relationship between Johnny Royalle and Calista: the former is thankfully trapped in the Drainer for most of the episode.

But the episode also refuses to let Deena Pilgrim off the sub’s bench: sidelining the book’s bad-ass MVP has been the show’s most disappointing adaptation choice but the character – especially as played by Susan Heywood – could still be that missing spark that Powers has often lacked, something that could help the show turn that second half into a goal-fest.

The Powers themselves are now beginning to feel like a much more organic part of this world, super-celebrities with all too human emotions – fear, arrogance, remorse, compassion. Eddie Izzard actually works much better as the philosopher-rock god incarnation of Wolfe than the cannibal monster picking people out of his beard, while Zora’s freezing in front of the publicity machine is a nice character touch (with the media turning her into an instant superstar regardless).

Walker, meanwhile, has his precious gifts stripped away once more (…or are they?) as the doors to the Drainer opens, his momentary burst of Powers-heroism unseen by anyone but Wolfe. But it’s during his climactic scene with Retro Girl at the episode’s end that Sharlto Copley really saves the day: having spent most of the season in tormented growly noir-detective mode, the actor’s relatable charm shines through: it’s a tender, caring and empathetic moment towards his world-weary ex-love.

And then there’s Retro Girl: the ultra-branded legend who’s the ultimate outsider – isolated by her gifts and the awful responsibility they’ve bestowed on her. Because despite what the legend says, Retro Girl is not omnipotent – and she’s all too aware of the awful, tragic chasm that sometimes lies between a promise and the reality of fulfilling it.

Line Of The week

“Your powers are gone, I shat them out.” Wolfe spells out his digestive system in more detail than necessary.

News Talking Head Of The Week

Still liking Wolfe expert Jeffrey Vice, the near-admiring way he talks his specialist subject sounds like he has a "special picture" of Wolfe at home that probably looks like a builder’s radio.

Most Desperately In Need Of A Trade Union

Johnny Royalle’s baldy lover-come-dogsbody (or bodies) Simons. Surely there’s a better job out there for a guy with those skills?

Shot Of The Week

The nervy looking heroes waiting to be called into action against Wolfe, looking like school kids waiting outside the headmaster’s office.