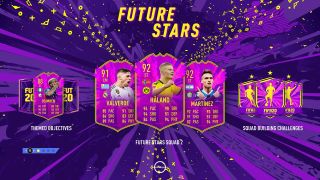 After TOTY, FIFA 20 Future Stars has become the second-most anticipated campaign in EA’s footballing juggernaut. It’s an Ultimate Team promo that lasts a fortnight, where the world’s greatest young players receive boosted player items. From that point on the respective cards aren’t available in packs, but in most cases can still be found on the FIFA 20 transfer market. Premier League stars featured this year include Dortmund sensation Erling Håland and Callum Hudson-Odoi of Chelsea, with a decent spread of similarly talented youngsters from across the globe. Wondering how it works and who else makes the list? Then read on for our FIFA 20 Future Stars guide.

What are FIFA 20 Future Stars and how do they work?

FIFA 20 Future Stars are a collection of Ultimate Team cards where some of the best talent in the world receive permanently boosted ratings. For instance, Portugal and Atletico Madrid striker Joao Felix’ Future Stars card features an overall rating of 92 - a full twelve points higher than his standard 80-rated gold item. For some players the boosts are even more insane: Manchester United forward Mason Greenwood has a standard silver item of 67, whereas the OVR rating on his Future Stars card is a colossal 90.

All players on the FIFA 20 Future Stars list are aged 23 or under. Other than Martin Odegaard (more on him shortly), every single one has an overall rating of at least 85. Felix’s 92 makes him the highest-rated Future Stars card, with standout stats including 94 shot power, 93 sprint speed, and 96 positioning.

When are FIFA 20 Future Stars released?

The first batch of Future Stars in packs contained 14 players, including Felix and Greenwood, and was available from Friday 31 January to Friday 7 February. A second batch is then due, which should remain in packs until Friday 14 February. Happy Valentine’s Day, but note that it’s unlikely your better half will accept a digital version of Norwich’s Max Aarons as an appropriate present.

How much do FIFA 20 Future Stars cost?

Some FIFA 20 Future Stars cards can’t be found on the transfer market. Moise Kean (Everton) and Weston McKinnie (Schalke) are only available by completing Squad Building Challenges. Meanwhile, Martin Odegaard (Real Sociedad) has a unique card which is upgradeable upon completion of specific objectives. I’ll explain how that works shortly.

As for the cards which are available on the transfer market, at the time of writing the most expensive is Joao Felix, at a lofty (and, for most players, prohibitive) 2.3 million coins. Greenwood follows in second at 1.14 million, with Real Madrid’s Rodrygo next up at 1.13 million.

Need to be a bit more thrifty with FIFA 20 coins? Despite my joke at his expense earlier, Norwich right-back Aarons is good value at 102,000 coins: 90 pace, 98 agility, 87 defensive awareness. Also consider Moussa Diaby of Bayer Leverkusen for 80,000 coins, or Ajax midfielder Lisandro Martinez, who’ll set you back a much more affordable 73K. Currently the latter pair are the only two cards priced at less than 100K on the open market.

Why are FIFA 20 Future Stars Martin Odegaard and Daniel James different from the other cards?

Real Sociedad winger Martin Odegaard is one of three cards which are upgradeable by completing specific in-game objectives. He starts off as an 80-rated RW card - all you need to do to earn that is score three goals using midfielders. The first boost turns him into an 84-rated CM card. The next leap is to an 85-OVR CAM card. And his final form stays at CAM, but with a monster overall rating of 87. That last one requires the completion of 11 total objectives, across at least 40 games.

Daniel James (Manchester United) and Victor Osimhen (Lille) have Future Stars cars which can be gradually boosted in the same manner.

What’s the explanation for this type of card? Over to publisher EA: “Each Upgradable Objectives Player will have a dedicated objective that you can work through to earn the four versions of their Future Star item, simulating that player’s progression throughout their career. After unlocking the first version of the player, their subsequent items can be earned by completing various objectives with the latest unlocked version.”

Yes there is, and it reads as follows.