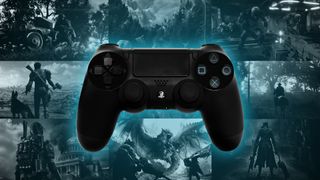 The list of ultimate best PS4 games is already a jam-packed place, but when you consider just how many of the upcoming PS4 games look fantastic, it's going t get even more competitive by the time the PS5 comes around. With games like The Last of Us 2 so close you can almost taste the spores, this list of best PS4 games is bound to change a bit this year, especially as we hurtle towards the inevitable upcoming PS5 games.

But now is the time to make sure that you've seen the best that this generation has to offer. There's a baffling amount of games on offer, but whether you're looking for the biggest exclusive titles like God of War and Spider-Man PS4, AAA third-party additions like Red Dead Redemption 2, or just some excellent indie offerings, we've got you covered.

When deciding the best PS4 games we consider how these games are to play right this very minute, because, if you have spare cash to spend, you want to know what offers the best value for time and money today, not two years ago. And you need to know if something is genuinely worth playing and if it adds something to your PlayStation experience - or if you'd be better off saving your money for one of the big upcoming PS4 games on the horizon. What follows, then, is our take on the best PS4 games out there - be they the best PS4 exclusives, big AAA cross-format games, or surprise indie hits that you can grab off the PSN store.

Not everyone will subscribe to Kingdom Hearts 3 for its storyline. Unless you've been following the antics of Sora and co for years now, you're going to be quite confused as to what the fudge is going on. But, probably, like me, you might well be here for the Disney. Donald Duck and Goofy are your BFFs, Mickey Mouse is the kign, but along this wild ride you're going to make a tonne more new friends along the lines of Baymax from Big Hero 6, all your best pals from Toy Story, little rat chef Remy, and even Boo and the crew from Monsters Inc. There's nothing quite like Kingdom Hearts 3, and although it is madder than your average box of frogs, that's part of its charm.

Dark Souls, the series that spawned a hundred imitators thanks to its emphasis on difficult-but-fair gameplay, came to a close with Dark Souls 3, but what a way to go out. Featuring a variety of awe-inspiring locales (some grotesque, some majestic), the same finely-tuned combat fans had come to expect, and a new emphasis on speed and versatility inspired by FromSoftware's own Bloodborne, Dark Souls 3 is a wonderful encapsulation of the series as a whole; not as scattered as Dark Souls 2, not as rough around the edges as the original. If you've been curious about the Souls games, this is where you should start.

Death Stranding released to huge fanfare this year, and whether you enjoy Hideo Kojima's strange stories or can find satisfaction in its 'walking simulator on energy drinks' gameplay, it's a game that will define the tail-end of the PS4 generation. You play as Sam Porter Bridges, a post-apocalyptic delivery man in a world populated by survivors, Timefall rain showers - which age and ultimately destroy anything they touch -  and Beached Things, or BTs – spirits of the dead unable to pass on. There's also Mules, bandits driven mad by a lust for packages, nightmarish villains Cliff and Higgs, and BB, your Bridge Baby who helps you avoid the BTs. Kojima has filled the game with celebrities too, with Norman Reedus as Sam, Margaret Qualley as Mama, and an embarrassment of cameos from his contacts book. You may not always love it, but you'll never have played anything like it either.

Four adrenaline-driven teens embark on the journey of a lifetime, but this ain’t no Road Trip. The RPG tale of Prince Noctis and his merry band straddles fantasy and reality with almost balletic grace, throwing in titanic monsters and classic missions alongside conversations about the weather and visuals that just sing "America". Final Fantasy 15's story is bonkers and its final destination a genuine surprise, but it's still a winding, delight-strewn road that Square converts are duty bound to travel – with sufficient appeal in its blockbuster battles and eclectic quest mix to suck in Fantasy novices, too.

Doubling down on all the intelligence, uncompromising emotional grit, and giddy, hilariously brutal Nazi killing that made its predecessor such a special game, Wolfenstein 2 has an even lesser tolerance for messing about. Transposing BJ Blazkowicz's intensely personal war to an alternative '60s America twisted into an ugly parody of itself by Nazi rule, Wolfenstein 2: The New Colossus brings the same aggressive focus on combat and character, alongside a newfound relevance and indignation. Not that it's all seriousness and soul-searching. Wolfenstein's kinetic, high-risk, high-reward combat is even better tuned up, with customisable dual-wielding laying on even more strategic carnage, just as hatchets and exo abilities blow up the stealth. Brainy, brawny, big, brash and beautiful, MachineGames' new wave of Wolfenstein remains some of the smartest and most unique FPS around.

This modern reboot is worthy of the name Doom, and is basically the FPS equivalent of a muscular body: it's speedy, empowering, and hits incredibly hard. You awake as the classic Doomguy to begin another spree of demon genocide on a Mars colony, with a surprisingly intriguing plotline that explains how you're able to murder so many Hellspawn. There's a primal satisfaction to whipping out a Super Shotgun, blasting an Imp's innards into oblivion, and then performing a lighting-fast, stunningly violent Glory Kill on the demon who caught shrapnel just behind him. The classic weapons and enemy types benefit from new additions like upgrades and double-jumping, making Doom one of the most frenetically fun shooters of all time. Also, you can grab it super cheap now.

The first Dishonored was so great there isn’t much room for manoeuvre here, in terms of quality: you’re again getting an options-packed adventure brimming with deftly woven narrative tales, set in a thoroughly believable world. What Dishonored 2, set 15 years later, adds is a second playable character – choose between original hero Corvo or super-powerful protege Emily. Supernatural abilities such as the latter’s grapple-like Far Reach again deliver both flair and fun, while a small-but-major improvement to melee combat is being able to turn a parry into a non-lethal knockout, making murder less of a necessity if stealth is your jam. The only notable drawback is assumed knowledge – the storyline makes little sense if you've not played the first game.

23. Rise of the Tomb Raider

Exactly two decades on from her PlayStation debut – hence the PS4 version of Rise Of The Tomb Raider being subtitled the '20 Year Celebration' edition – Lara Croft delivers another must-own round of substantive combat and taxing-yet-enjoyable puzzling. The storyline, with Ms Croft venturing through Siberia in an attempt to complete her father's work in the lost city of Kitezh, doesn't scream originality but packs in some genuine shocks, while the platforming and zip-lining mechanics take Lara to heights she's never before reached – and not just figuratively. Choose to pick it up on PS4 and you also get all previous DLC, a new co-op Endurance option, and Blood Ties single player content. And you really should choose to pick it up.

Also consider: Lara Croft and the Temple Of Osiris

Hitting PS4 with the atomic force of a Fat Boy, Fallout 4’s excellent gunplay and crafting systems can trigger a nasty case of RPG-itis. Don't worry though, there's a Stimpak for that. There’s so much to do in this post apocalypse it's almost terrifying and quite often you'll set off to complete a mission and get completely side-tracked when you find something wonderful/horrific along the way. Giving the main character a proper voice adds an extra layer of polish to proceedings, and the expanded set of companions and customisation options are very welcome too. It’s not without its faults (or vaults), but the scale of Bethesda’s wasteland will keep you bunkered down for weeks. Slosh in the extensive DLC additions available in the complete Game of the Year version and you’ll never want to return from the Wasteland.

Titanfall 2 is an absolute colossus of a game. It was one of the biggest surprises of 2016, as it delivered a smart campaign and enhanced the killer mulitplayer of the original (which was Xbox-only). The story is overflowing with unique twists in a genre which long ago anchored itself in a sea of wash-rinse-repeat, offering true freedom while still retaining a sense of the familiar. Its navigation and combat feel truly three-dimensional, and its big-gun battles are an adrenaline rush even Optimus Prime would struggle to contain. A special, special game which, in execution, is anything but robotic. Holds up beautifully in 2018, and you can pick it up for a bargain price.