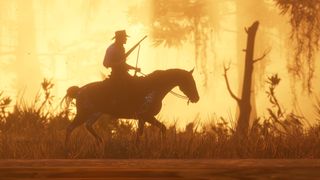 Competing against others in multiplayer is great, but there's nothing quite like immersing yourself in one of the best single player games in 2019. These games are some of the very best available on PS4, Xbox One, Nintendo Switch and PC and as the rumours for the next generation of consoles start to gain traction, what better time to pick up some of the best single player games from the current generation? There's hundreds of hours worth of content here to get stuck into, so what are you waiting for?

After Failbetter Games released the incredible Sunless Sea, Sunless Skies is the logical next step, right? Billed as a "gothic horror role play game", Sunless Skies is set in the Fallen London universe where "the only thing between you and the waste-winds, storms, and cosmic lightning is your engine". Incredible writing and gorgeous world design make Sunless Skies one of the best new games 2019 has to offer so far.

"Ah, it's only 11pm, I'll just have one more turn", you say to yourself on the eve of Valentine's Day. What seems like 10 minutes pass, you look at the clock, and it's suddenly 5:30am. That is how your time with Civilization VI will pass. Not via a time portal, but instead through a turn-based strategy game that is so engrossing, needing sleep will become a thing of the past...because launching nukes at Mahatma Gandhi is much more important.

If you've never played a Soulsborne game before, Bloodborne is the perfect place to jump in. Compared to Dark Souls, the combat is more offensive with fast, fluid attacks and no shields available, you'll be dodging and ducking like Vince Vaughn. The gothic Victorian aesthetic is picturesque and a gorgeous setting to be fighting enormous, mutant bosses as they try to rip you limb from limb.

The final instalment in Nathan Drake's escapades is by far his best, as he and his brother Sam embark on a search for Captain Avery's long lost treasure. Their path takes them from Panama to the scorching hot Madagascar, followed by Italy and the Scottish highlands. It introduces a more open-world style of gameplay, the environments are utterly beautiful, and the combat mechanics are the best the series has seen. You can pick up the Nathan Drake collection to experience the full journey, or Uncharted 4: A Thief's End stands up by itself.

Fans of the original PlayStation 2 Spider-Man games had been crying out for a new title with satisfying web-swinging physics, and Insomniac answered their prayers with glee. Spider-Man PS4 is essentially a Spider-Man simulator - you swing through New York, defeating the bad guys and saving the day over, and over, and over again. Much to the dismay of J. Jonah Jameson, of course. It's one of the best PS4 exclusives from 2018 and for good reason. There's even a bunch of DLC available now, which is all absolutely stellar.

12. Ori and the Blind Forest

Ori and the Blind Forest is magical. There are moments where you'll ponder just how a platformer has managed to pull off such a wonderful experience. From the very start, you'll be weeping like a willow as you're introduced to Ori, Naru, Sein, and the ultimate reason for Ori's journey through the Blind Forest. Gameplay-wise, Ori and the Blind Forest introduces a unique checkpoint system that allows you to place them down wherever you see fit, which is both a blessing and a curse.

If you enjoy football/soccer, then you've missed a beat if you've never tried the Football Manager series before. Football Manager 2019 is the latest instalment and it's the "best in the series by some distance". Whether you want to play as the biggest club in the world - Manchester United, of course - and dominate the Premier League with all the riches you could dream of, or start from the very bottom and work your way up, Football Manager 2019 has it all.

If you're single this Valentine's Day, why not get started on wooing one of the many villagers in Stardew Valley? At the core it's a farming game, where you inherit your grandfather's old abandoned farm and turn it into a majestic, bustling environment with crops and animals. But on the side, you can explore the village, make friends with the townsfolk and even get married. It's one of the most relaxing games out there and you'll soon be wishing your real life was as mellow.

9. The Legend of Zelda: Breath of the Wild

Who'd have thought that of all games, the Zelda series would be the one to introduce one of the best open worlds of all time? Legend of Zelda: Breath of the Wild is Zelda's first... sorry, Link's first journey on the Nintendo Switch and it's one of his best ever. There's so much to do! From searching for the 900 Korok Seeds to hunting down Guardians and completing shrines, Breath of the Wild is perhaps the best RPG available on Switch right now.

The God of War franchise has always been great, but God of War PS4 has taken things to the next level. It's gone from linear storytelling to a semi-open world, where players control Kratos and explore worlds taken straight from Norse mythology. It's brutal, bad ass, and bafflingly beautiful, which is why we called it one of "PlayStation's finest moments".

After churning out yearly Assassin's Creed games for some time, Ubisoft took a step back and realised it wasn't quite enough and the series didn't have the prestige it once did. They released Assassin's Creed Origins, which turned the franchise into a more open world RPG, then built upon that with Assassin's Creed Odyssey; the best Assassin's Creed game yet. An engrossing story and stunning visuals make for a vast journey across ancient Greece. It's a true odyssey.

Everyone's favourite plumber leapt onto the Nintendo Switch with a purpose with Super Mario Odyssey, along with his new best pal Cappy. Embark on another treacherous journey across multiple worlds to save Princess Peach from Bowser's clutches and meet numerous friendly and fearsome characters along the way. Super Mario Odyssey retains the charm and captivating gameplay from previous instalments, while keeping up with modern gameplay elements and introducing new mechanics of its own.

Who needs a significant other when you can journey through various Disney worlds with Donald Duck and Goofy by your side? Kingdom Hearts 3 is the long-awaited third instalment in the franchise and it hasn't disappointed. From climbing the North Mountain in Arendelle (Frozen) to exploring Andy's Room in Toy Box (Toy Story) and flying around San Fransokyo (Big Hero 6), Kingdom Hearts 3 is a lengthy JRPG that is perfect for veterans and newcomers to the series alike.

Is there a better way to kick off this list than with Rockstar's western epic? A prequel to the first game, Red Dead Redemption 2 places you in the shoes of Arthur Morgan. Explore the staggeringly beautiful wild west on horseback, hunt animals, play poker, go fishing and more as you saunter around as part of Dutch van der Linde's gang. When you've finished with the 80+ hour journey, jump into Red Dead Online for even more wild west action.

Robot dinosaurs. Need we say anything else? Probably not, but we will anyway. Take control of Aloy in Horizon Zero Dawn, an open world RPG where she discovers herself and her history. Robot dinosaurs inhabit the landscape, from small Watchers to terrifying Snapmaws and Thunderjaws. Horizon Zero Dawn rarely puts a foot wrong, from the plethora of ways to engage in combat to travelling across the map and exploring the various tribes that have set up homes and towns in every corner.

One of the oldest games on this list, The Last Of Us is a heart-wrenching journey set in the near future. Without spoiling too much, a deadly disease has covered most of the world and your goal is to escort the only known immune human to a research lab, so a cure can be created. What ensues is a tale of love and loss, with breathtaking moments that tugs on the heartstrings like never before.

If you can get your head round a brand new style of combat that does away with most conventions seen in other games, the rest of The Witcher 3 could be considered perfect. You are Geralt of Rivia, a Witcher - also known as a monster slayer to you and I. There's so much to do and see in The Witcher 3, it may seem overwhelming at first, but after you complete your first few monster contracts and begin Geralt's journey to find the ones he loves, you will not put the game down until you've reached the end and slain thousands of enemies.

There's 15 absolutely phenomenal single player games here, so you don't have to be alone on this Valentine's Day, or any Valentine's Day for the next 15 years!