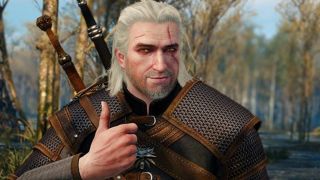 Maybe you don't have a Valentine, or you're waiting for the weather to warm up to leave your hibernation den...either way, it's time for you to jump into a time-consuming RPG. Not sure where to start? Well, that's what we're here for.

If The Witcher Netflix series has you feeling like you want to toss a coin to your witcher, maybe you'd like to start with The Witcher 3. It's high up on our list, so you'd be choosing wisely. But if that's not your vibe, don't worry, as there's a ton of variety through our 25 best RPG list. We've got games like last year's hilarious take on space capitalism, The Outer Worlds, and titles that seem infinite like The Elder Scrolls 5: Skryim that will keep you busy dueling dragons or decorating houses until spring arrives. Whether you're a sword fighter or shrink ray wielder, we've got the RPG for you.

Every title on this list is stepped in RPG elements that will let you completely customize your gaming experience - if you wanna be a bad guy, go off, but if you'e looking to do some good in a virtual world, that's your prerogative. You may not be able to tailor every moment of your IRL world, but you can certainly do so in these games. Some of these games will overlap with our list of the best open world games to play right now, but not many, so head to that list for even more options to get you through the chilly evenings until spring has sprung.

A bunch of these games can display in 4K resolution, so you'll need an Xbox One X or PS4 Pro to see them at their biggest and best on consoles (it's worth it, trust us). For those who haven't got one, visit our pages for Xbox One X deals or PS4 Pro deals to snag one for a good price.

So whether you're more into fantasy or sci-fi, noonwraith slaying or spaceship hijacking, get yourself through the waning winter months with a nice, juicy RPG. Our top 25 list is below.

School is hard. It’s even harder when you have a super-powered alter ego who spends their nights roaming through a supernatural realm fighting the bloodthirsty, personified desires of the people around them. Fighting isn’t the only thing that makes Persona 5 one of the best RPG games of 2017, though. As well as slashing your way through winding combat levels, you have to navigate daily life as a student at your new Academy. Chat to your fellow classmates, try to balance schoolwork with a part-time job… or be a bit more productive with your time and craft items that’ll help you in an alternate world that’s filled with the manifestation of people’s (rather unfriendly) inner psyches. The two different gameplay cycles flesh out Persona 5 and make it an incredibly well balanced game, and one that you can’t miss even if you have a ton of homework to do.

24. South Park: The Stick of Truth

It should come as no surprise that not only is South Park: The Stick of Truth ridiculously funny, but it also pushes fantasy tropes as far as they’ll go. Thankfully that doesn’t mean that you’re stuck as a Mage, Fighter, Thief, or Jew (a class which grants you the jew-jitsu fighting style - no, I’m not kidding) as throughout the game you can learn whichever skills you want and tailor the New Kid to be exactly the hero you have in mind. You know, if you imagine 2D kids when you hear the word ‘hero’. Characters from the TV show fight alongside you, although you can only saunter around with one of them at a time, and as long as you’re ok with tons of inside jokes and the odd magical fart attack, The Stick of Truth will delight for hours on end.

It’s going to be tricky to leave the world of Ni No Kuni 2 behind, mainly because it’s so vivid that each district takes on a life of its own. As the young king Evan, you’ve got to prove to your subjects that you’re worthy of the crown - and their adoration, of course. Although most of your time is spent adventuring around the various regions doing favours for people, that’s unsurprisingly not all there is to Ni No Kuni 2. Part of your duties involve managing your Kingdom - building new, well, buildings and watch how your resources alter and change to match (just keep an eye on the treasury). Skirmishes are also dotted around the whole map encourage you to strengthen your army in real-time strategy encounters, so if you’re looking for a fully-rounded Kingdom Simulator look no further than Ni No Kuni 2.

Good god, Yarnum is beautiful. Even the beasts have a kind of bewitching sadness about them with their broken bodies, as if their stories would be worth hearing if they could only speak. Bloodborne is saturated in atmosphere, and at first you won’t be able to envisage ever getting used to tackling the creatures that jump out at you from the shadows. But seeing your character grow from clueless beginner to feared Hunter is quite something, even if the main way you’ll witness that transformation is through how you wield your weapons. With a more sombre tone than Dark Souls, Bloodborne’s twisted former citizens make all that monster slaying a little heavy on the conscience - but don’t let that stop you from fighting back.

Another RPG game with royal blood coursing through its veins, Final Fantasy 15 puts you in the shoes of Noctis as he adventures across the land of Eos with his buddies. The power of friendship isn’t just so you can fill all the seats in your car, though: bespectacled Ignis learns new recipes as you dedicate more time to exploration, during combat your pals back up your attacks with perfectly-timed combo strikes, Prompto’s photography skills improve alongside the selfies he takes, and Gladiolus’ survival abilities scales with the distance you travel during the day. As you’re responsible for Noctis’ growth and the well-being of your chums, this RPG game is saturated with heart. Prepare yourself for the distinct possibility of getting over attached to those virtual characters.

I’m going to let you in on a secret: you don’t always have to fight those big bad monsters that typically appear in the best RPGs. Undertale chucks you into the Underground, a realm below earth filled with weird but wonderful monsters. Trying to break through to the surface involves meeting these odd creatures and choosing whether to kill them...or show mercy, make some friends, and prevent any more bloodshed. See, the monsters ended up on the wrong side of a war with the humans and it didn’t end too well. As a human yourself, they don’t look upon you too kindly, so the importance of your behaviour can’t be underestimated and being able to choose how you deal with each monster makes Undertale ripe for replaying time and time again.

There’s a good reason why World of Warcraft has such a loyal fanbase: it’s one of the best RPG games out there, hands-down. With a practically endless loot system and two completely different factions to choose from as they battle through Azeroth, there’s the potential to literally see both sides of the war between the Horde and the Alliance. Take on bosses with a humongous group of friends or go on questing alone - no matter whether you like your roleplaying experience to be large or small, World of Warcraft has been going on long enough to fill any craving you have.

Hacking and slashing with all the fury of the wronged android is pretty fun as it is, but when you take advantage of the fact that those nuts and bolts that make up your body mean you can pick and choose which chips are installed in that mind of yours, then the game starts to run as smoothly as a well-oiled machine. Swap them in and out to suit the enemies you’re coming up against, and take full advantage of the four weapons at your disposal to create devastating combos, and when things get really desperate - or if you just want to keep your distance - your floating support unit (called Pod) can pepper your foes with bullets or lasers. Encompassing both hack-n-slash and shoot-em-up genres, Nier: Automata’s story is enthralling enough to make you go through it all over again to get those extra endings.

Just in case the title didn’t make it obvious, in Monster Hunter: World you hunt monsters. But although the main prize is the Diablos armour set or just the thrill of the hunt itself, how you take down those beasts is what you’ll be obsessing over as soon as you face your first Great Jagras. Experimenting with different weapons will take up your first handful of hours, and then once you develop an attachment to a particular implement you start to realise the crafting potential with all those bits and bobs dropped by your (now dead) quarries. The other half of the game opens up with this epiphany, so prepare yourself for some micro-management levels of tweaking and optimising before you go out into the wild to perfect your character for the fight they’re about to face.

Turn to page 2 to check out the rest of our picks for the best RPG games around...