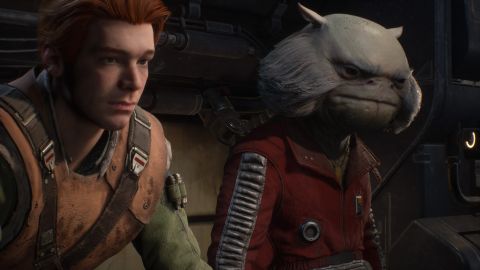 Star Wars Jedi: Fallen Order might take ideas liberally from others, but the result is an endearing adventure that ranks as EA's best Star Wars effort yet.

Don't worry, they got the lightsaber right. Star Wars Jedi: Fallen Order is more than the laser sword that Cal swings through whole platoons of stormtroopers, but that's the main reason people will come to Respawn's adventure, and it's the reason they'll stay with it. Whether it's hurling it at the creatures you'll face or flicking bolt blasters back at Imperial troopers, it's a strong realisation of what a lightsaber should feel like.

But, it's not the star of the show. Star Wars Jedi: Fallen Order is at its best when it's a cross between fighting and being on a Star Wars safari, as you explore dense planets that are teeming with hidden areas, lore, and other secrets for you to unearth. It's these large playgrounds that leave the biggest impression as you take aspiring Jedi Cal Kestis on a journey to restore the Jedi Order.

Platforms: PS4, Xbox One, and PC

Brac to the future

Fallen Order's story kicks off on Bracca, a scrapping planet where workers harvest Republic ships for the Empire. The Jedi Order have been wiped out following Order 66, and as a survivor of it, Cal is laying low as a worker for the Scrapper Guild. His anonymity doesn't last long though, as a workplace incident sees him inadvertently revealing his powers to the Empire and a deadly Inquisitor called The Second Sister. After a messy escape from Bracca, Cal sets off on a quest to restart the Jedi Order.

It's a frantic opening that suggests an Uncharted-esque adventure is instore – an early set-piece involving a moving train offers strong supporting evidence for this – yet Fallen Order is so much more than that. It's also a planet-spanning metroidvania, where equipment or skills you discover on one level unlock new paths in an earlier one. On top of that, it's a demanding melee slasher that has plenty in common with this year's Sekiro: Shadows Die Twice, as well as boasting some Tomb Raider-style environmental puzzling that will flex your Jedi skills in ways that don't involve throwing stormtroopers over cliffs (sadly). While the game's influences can be seen on Cal's poncho from a mile off, they're woven together in a way that never comes across as derivative.

You must learn control

That starts with the combat, which is deliberately paced to put an emphasis on waiting for the right moment to strike. The From Software influence is clear in how you should engage enemies cautiously, with your finger hovering over the block button at all times, but Fallen Order is demanding rather than punishing. Patience may be required in every fight, (and bosses are nowhere near as hair-yankingly tough as the ones you tackle in Sekiro) but that comes with the reward of feeling like you're a space samurai carving through anyone foolish enough to get in your way. Plus, difficulty options allow you to fine tune your experience, from players who want to focus on the story, to those craving a sterner test, which is a welcome way of easing the tension if you start to get frustrated.

Then there are Cal's Force powers. At the start of the game, Cal has the ability to slow down his enemies; handy, but limited. As you discover powers throughout the story, you start to find ways of making them work together to do some grin-inducing attacks – pausing a blaster bolt and pulling an enemy into it is great fun, as is pushing a rocket straight back into the trooper who fired it at you. One of the combat's great joys is discovering how you can make Cal's Force skills work together and the game's steady stream of new powers keeps you experimenting throughout.

Not that you'll be able to stroll through levels hurling enemies over edges to your heart's content. A Force power meter keeps your abilities in check, making you think about how and when you'll use them. That's so you engage with the core lightsaber combat rather than just force yanking every single thing you see into your lightsaber (although it must be said, that never gets old). If Fallen Order's stated aim is to make you feel like Jedi then, at its balletic best, the combat manages it.

Hives of scum and villainy

The deliberate pace of the combat is mirrored when it comes to exploring the planets that make up the game's levels. This isn't a game where you're rushing through linear levels, hurtling along a single path and through story beats. Instead, these are large planets with plenty to discover on them, and while you'll never feel the need to rush through them, the gear gating means there's also plenty of reasons to frequently revisit.

For instance, an early planet you head to, Zeffo, seems big on your first visit, but it's only when you return to really dig into it do you realise how intricate it is. A crash site that you'll need to stray down some off-beaten paths to find leads you towards a Venator Wreck. When I first discover it, I can only scout around the outside of the ship, but once I unlocked the Jedi Flip (read: double jump) later on, I was able to journey deeper into the ship, discovering handy upgrades for Cal alongside lore about how the gigantic ship had ended up as wreckage on Zeffo.

These types of moments, where you return to an area you thought you had explored thoroughly only for it to spool out in an intriguing new direction, are the ones where Fallen Order makes the biggest impression. Not only does it give you a chance to explore corners of Star Wars in a tangible way that recent games haven't, but they feel like places rather than well-decorated sets.

While there aren't too many planets in the game – six in total, although you'll spend more time on some than others – each has its own distinct identity. Kashyyyk's verdant forests and jungle seem to stretch out over huge areas, while Dathomir is a harsh and intricate maze, where you'll end up trying to navigate through it's swampy depths.

There aren't many downsides to poking around these corners of the galaxy, but there are a couple of little niggles. The main one is that platforming can be imprecise, especially before you unlock the Jedi Flip. On more than a few occasions, I ended up leaping into the abyss because I didn't quite line up my jump right. Still, the level and visual design of planets are the game's unexpected highlights.

Hold on a parsec

If wandering around these planets on the hunt for secrets is one of the game's strongest points, the story that sets you on this path isn't quite as compelling. Simply put, the cat-and-mouse tale that's set up at the beginning quickly moves into a hunt for a Very Important Object that only really starts to engage in the final third.

Fortunately, the characters help keep the journey entertaining. Cal isn't the most complex of leads, but his endless earnestness slowly won me around to him. Similarly, while his crew might be archetypes – one's a wise mentor and the other is a grumpy pilot – they make for good company as you go planet hopping. Greez, the aforementioned grump, especially becomes more loveable as he warms to his new mates.

There's two standouts though, and that's the adorably chirpy BD-1 and the deliciously villainous Second Sister. Not only is BD-1 extremely handy throughout your adventure, as it learns how to ride ziplines, power up generators, and hack droids, but the little bot gets a surprisingly full backstory that only endears you more to it. However, the Second Sister is the game's most fascinating character. I won't take you into Spoiler City, but if she initially appears one-note, her overall arc is the game's most well-realised. Plus, it's hard not to enjoy her ripping the piss out of Cal whenever they cross 'sabers, so she earns bonus points for that.

There's plenty to like about Fallen Order, but it should come with the caveat that it's slightly rougher than I was expecting. I've played the entire game on PS4 Pro and glitches and framerate stuttering have cropped up enough to warrant mentioning. One patch has already been released before launch, and EA has told us that another is on the way, but it did give my initial playthrough a rougher-than-ideal feel.

Still, even if this isn't the most polished Star Wars game we've seen, it's also the first one in years that comes closest to capturing the magic of the series. Battlefront looked like Star Wars. Fallen Order, with an endearing earnestness that mirrors its heroes, gets what makes the series special. It's in the glimpses of strange worlds and cultures we want to learn more about, it's enjoying the ragtag groups who slowly learn to trust each other, and it's the fact that lightsabers are really great fun. Especially when you get them right.

Star Wars Jedi: Fallen Order might take ideas liberally from others, but the result is an endearing adventure that ranks as EA's best Star Wars effort yet.