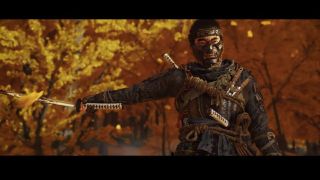 We knew it was coming, and we weren't disappointed - a full-length, world premiere Ghost of Tsushima trailer dropped at The Game Awards 2019 and it's as epic and gorgeous as we expected - and it's dropping for the PS4 in summer 2020. Check out the trailer below.

A haunting performance by #TheGameAwards Orchestra for a haunting Ghost of Tsushima World Premiere Trailer! 👻 pic.twitter.com/PVsNDGW4mODecember 13, 2019

As GamesRadar+ previously reported, the original teaser trailer opens with Mongol invaders hauling a wagon down a path before encountering a samurai ahead. They bear down and prepare to fight, but the teaser ends before we figure out how this samurai dispatches the villains.

In the full-length trailer that debuted at The Game Awards, we see the samurai conjure some type of flame that he slams into the ground - cue flashback and voiceover. "The Ghost," it says, "Some say he died on the beach, others say he is a storm made flesh. When the wind flashes their tents and boats, they know he is coming." The trailer is moody and beautiful, with gorgeous autumnal colors, eerie nighttime vistas, and some gore that we would expect from a samurai game.

Prior to this trailer, we knew Ghost of Tsushima would tell the tale of Jin Saka, a lone samurai warrior in 13th century Japan battling Mongol invaders - and now we know how. The full-length trailer gives us a peek at some of the gameplay, which includes stealth, horse riding, wall-climbing, a bit of magic, and a whole lotta sword fighting. This is a big departure for developer Sucker Punch, the studio behind the Infamous series.

The exclusive trailer also revealed the game's release date and confirms it will be a PS4 title (at least initially). Ghost of Tsushima will be available on the PS4 in summer 2020.

That wasn't the only game announced at The Game Awards, we're also getting Hellblade 2: Senua's Saga for the Xbox Series X.