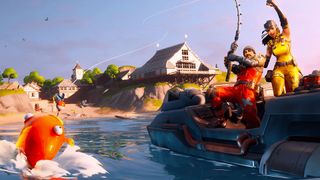 Update: Sadly, the Fortnite annual pass is not happening. A spokesperson from Epic Games reached out to us to give some clarification surrounding datamines that surfaced earlier today, which uncovered mention of an annual pass:

"We've seen discussions around a 2020 Annual Pass as a result of data mining the v11.30 build. Occasionally prototype features make it into our build that end up not being released. While the 2020 Annual Pass was considered, we have no plans to release it... unlike the Bao Bros."

While that is a shame, we have left the original story as first reported below.

Original story: A new Fortnite annual season pass is incoming, according to new leaks. A dataminer by the name of Skin Tracker discovered a new string of information in the next v 11.30 update that's due to go live later today, and unearthed the 2020 annual pass.

Dataminer Lucas7Yoshi also uncovered a whole host of new cosmetic skins with various winter themes, including some variants that look set to be included in the annual pass.

Epic recently teased that it's due to make a special announcement about Fortnite during the Game Awards that's set to take place later today, December 12 at 8:30pm ET / 5:30pm PT / 1:30am GMT.

While we still don't know what this special announcement will be, this latest leak could very well have beaten Epic to it. Other information has also surfaced suggesting Fortnite split-screen is set come to the world of Fortnite too. It's possible that both leaks could be what Epic unveil during the awards show.

Fortnite Chapter 2 Season 1 is in full swing, and will continue to run until early February. Epic announced the latest season would be extended for an extra few months back in November in order to "prepare all he new holiday-themed updates." While the latest season is stretching on for quite some time, in classic Fortnite fashion, we still have plenty to get excited about.

An upcoming event on December 14 will let players view a live screening of a new scene from Star Wars: The Rise of Skywalker in-game.

If you don't want to miss out on the Star Wars screening this weekend, check out our handy guide on how to watch the Fortnite Star Wars event.