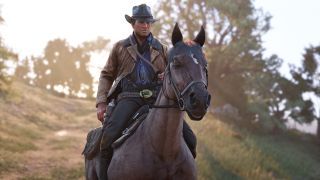 With an always-expanding online Western world and more weapons, equipment, and pastimes to invest in than ever before, it's not really surprising that Red Dead Online microtransactions have become part of this ecosystem. After Rockstar found a staggering level of success with the microtransactions incorporated into GTA Online, we always knew that there would be a comparable system implemented in Red Dead Online, so anyone who wants to take a leap ahead can spend some of their real cash to access useful items which would otherwise be out of reach. There are a few differences with how these systems work in the two different systems, so read on to discover everything you need to know about how Red Dead Online microtransactions work.

Are there Red Dead Online microtransactions?

If it ain't broke, don't fix it. Red Dead Online follows a similar system to the GTA Online Shark Cards, which you use to buy virtual currency and get a better exchange rate the more real money you spent at once. Obviously 'Shark Cards' are very much geared to GTA Online's modern marketplace, so instead you'll be purchasing Red Dead Online Gold Bars to bolster your in-game currency like a good ol' prospector, allowing you to unlock items you don't have the virtual dollars for.

What can I buy with Red Dead Online microtransactions?

You can use Red Dead Online microtransactions to buy items that are specifically cosmetic, such as a new hat or something to snazz up your camp, rather than anything that could give you an in-game edge. Weapons have to be purchased using in-game cash for example, rather than Gold Bars.

Interestingly, you can earn Gold Bars in Red Dead Online too, without having to pay any real money for them, but according to Reddit users it'll take you around eight hours of play to earn yourself one, single, Gold Bar. So if you wanted to buy something special, like fast travel from your camp for example, which costs 112 Gold Bars, you're looking at having to clock almost 900 hours to earn that amount. Or you can reach level 65 in Red Dead Online of course.