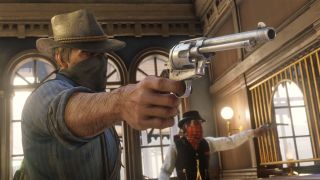 Times are hard in the Old West, and if you've played through the main story you'll already know how tricky it is to keep your account topped up with virtual dollars, during the early parts of your adventure at least. Things are even tougher online, so knowing how to make money fast in Red Dead Online is vital information. Some of the tried and tested methods for earning funds, such as looting valuable items from the bodies of your defeated foes, provide much less income in Red Dead Online, so you'll have to find other sources of income if you want to make bank. Open up options for purchasing the more expensive items and upgrades, while streamlining your spending with our handy advice on how to make money fast in Red Dead Online.

The economy in the Old West was awful, but Red Dead Online’s in-game system is perhaps even more brutal, with inflated prices and painful returns. To benefit from a lot of these tips, you’re going to want to sand some of your budget down to make sure that your turnover is as efficient and resourceful as possible.

First of all, if your main goal is to become financially stable and stop living hand-to-mouth, we’d recommend you cut out all luxuries unless absolutely necessary. The community in this game is far from kind, and people will trample or murder you at the drop of a hat just because you’re in the way. Admittedly, it’s a fun way to blow off steam when the game is forcing you to grind, but it’s still not very nice when you’ve just necked your expensive Health Cure.

Don’t buy provisions or tonics unless you’re stocking up for a story mission, and even then be as thrifty as possible. You can loot most of what you can buy, so do some exploring and stock up that way. Don’t bother with any clothing items or camp upgrades until you need them - you only want to buy things that service an income stream, like ammunition or bait. If you’re a PS4 user, don’t look a gift horse in the mouth and pick up the Arabian from the stable. Similarly, if you’re an Ultimate Edition player, grab all of your free weaponry and other items as soon as possible.

You need all the advantages you’re going to get to survive in this economy, so be frugal and use your money wisely. Save up first for the weapons that you need to hunt properly, and keep a nest egg for bait to fish and stable upkeep. Any other expense you should probably question.

This is by far and away the easiest method of making quick money, though it comes with a catch. One of the story missions currently available in Red Dead Online is titled “Kill Them, Each And Every One,” and it involves you and your squad storming Fort Mercer with helmets on your noggins. It’s a tough one, but it nets you something in the ballpark of $200-250 for first-time completion, similar to the heist payouts in GTA Online. This is a great lump-sum that will set you up nicely at the start of the game, especially if you’re working towards getting a good rifle for hunting or upgrading your camp.

Unfortunately this method will break the continuity of your story completion, but if you’re happy to side-step that, simply hit Left on the D-Pad, head to Quick Join and then ‘Story Mission On-Call’ to be dropped into a posse. It’s not guaranteed you’re going to end up with that mission, so keep trying until you get it, but story missions in general do afford a better wad of cash than the more lowbrow multiplayer activities, so it’s a steady means of acquiring dollars.

Much like GTA Online, you get rewards for fulfilling certain criteria within missions, so look out for those in your log and fill them out in future playthroughs for maximum turnover.

A quick but non-guaranteed means of securing dollars is through collecting treasure maps - you will be familiar with this concept if you’ve completed the tutorial. You can receive these documents intermittently by ranking up in Red Dead Online - you get one at Level 10, then at every 5 levels after that - but you also pick them up at random from bandit leaders who inhabit gang hideouts.

As part of the in-built honor system, when you stumble across these head honchos you are provided with a choice to spare or kill the leader once you’ve cleared out the outpost. Hideouts appear at random, and you will have to wipe out his minions first before you get this prompt (make sure to loot everybody for maximum return). Whatever you choose, there is a chance to receive a treasure map from his corpse or via a box hidden in the area.

If you know where the hideouts are in single-player, this has some vague crossover and you can use this to your advantage and cycle between them. Once you’ve been given a map, simply follow the instructions to the designated location and it should be easy to find with Eagle Eye. Again, this isn’t guaranteed money, but it pays very well in comparison to normal missions.

One of the best ways to grind dollars in Red Dead Redemption 2’s story mode is hunting. This is also the case in Red Dead Online, where perfect pelts earn the player $5. If you consider that free-roam activities and other multiplayer missions usually offer between $4 and $10, you can see how hunting is a much better use of your time if you want to become a mogul.

First though, you’re going to need the tools to pull this off. On your shopping list should be Arrows, a Varmint Rifle, and a Bolt-Action Rifle (unlocked at Rank 7). These three weapons will set you up nicely to hunt small and big game. The Bolt-Action in particular is going to run you $360, so I’d suggest keeping your money from the opening of the game and grinding until you can afford it. This will ensure you have a stable means of income when the game boots you out into the cold.

Bison and Deer are your best bet. Make sure to only shoot for the vital organs and go after animals that are three-stars to secure a clean and profitable kill. Also, if you’re looking to maximize efficiency, wrangle another horse to follow your mangy nag so you can stow two pelts instead of one, and sell them to the Butchers dotted around the map - Red Dead Online doesn’t have any Trappers for some reason.

Until you pick up the Bolt-Action, we found it was easy to farm perfect Sheep pelts at the farm in Valentine. If you head there at night and you’re not afraid of losing honor for slaughter, you can farm perfect $2 pelts with ease using your standard repeater. The local Butcher is just around the corner too.

With the in-game economy as dire as it is, it can’t hurt to tinker with the systems to get you on your feet, and there are two main glitches players can partake in to get stacks of money early doors. One of these involves finding particular houses off the beaten path, that are curiously stuffed with loot cabinets.

For example, there’s a cabin west of Wallace Station with a gold cabinet inside that usually rewards the player with multiple loot items like pocket watches and jewelry, which can be easily sold to a fence for around $3-6 each.

Simply quit your instance and reload back into free roam when prompted to join a new server and restock the cabinet. Keep doing this and your pockets will be lined in no time. This isn’t exactly a secret anymore, so it might be worthwhile finding your own special secluded cabinet to loot if you want to fend off the riff raff while you grab your loot.

The other option is effective but takes a long time. Similar to GTA Online, if you delete your character and start up a new one, you keep the money you’ve earned. If you don’t care about aesthetics, simply finish the first set of story missions, collect the level 10 treasure map and then start all over again to retain your earnings and make around $500 for three hours work. If you really don’t care about XP or any sense of permanence and are just looking to make a quick buck, perhaps this is the best option for you.

For some reason, fishing in Red Dead Online is locked off until you’re Level 14, but once you’re there it’s best to quickly purchase a rod to add another arrow to your income quiver. Buy a ton of worm bait from Lagras and set up camp near a body of water, being careful to raise your white flag so griefers can’t murder you whilst you fish.

This aspect is crucial, and it can be a bit of a pain to secure a location that’s near water and also a campsite spot, seeing as Cripps can pack up your home and move it, especially when you leave a server. Flat Iron Lake seems to be a strong spot for it at the moment.

You want to catch Steelhead Trout, which are worth $4.25 each. Other fish are useful too, but this is the main money-making catch in the area. Simply drain the lake of wildlife until you can’t carry any more, then head to the nearby Butcher. This can also be done in the Grizzlies to catch Sockeye Salmon, which yield a similar amount of cash but have to be stored on your horse. The best fish can be put in a saddlebag and still retain a high price tag at the Butcher, so look out for those then rinse and repeat until you’ve made enough money.

If you’ve had your fill of the campaign in Red Dead Redemption 2 you’re probably familiar enough with the gunplay to do well in the multiplayer component. The Showdown Series playlist can be an effective means to build cash, and gain some XP whilst you’re at it. A lot of the missions don’t require much effort to play them, meaning you can kind of remove your brain and let the timer tick down and guarantee some easy money.

There’s no risk of being kicked out unless you’re idling, and there’s no objective or ‘fail parameters’ that stop you from receiving a reward, no matter how paltry the cash is when you finish.

Choosing the Showdown Series playlist over Showdown Series Large means you’ll have fewer players to compete with, which is important when you’re playing the Battle Royale modes. We gained around $15 from winning a throwing knives only match in the Lemoyne swamp, and it was much quicker due to the lack of players. Earning money in Red Dead Online seems to be all about efficiency, so find something that works for you.