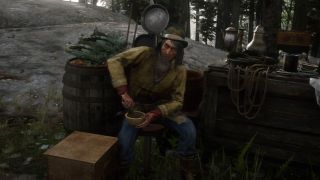 The Red Dead series has always had morality at its core, steering the storylines based on the good or bad decisions you make along the way, but if you want to switch your morality in Red Dead Online then it's helpful to know that a shortcut is available. If you've worked you way through the main single player campaign in Red Dead Redemption 2 then you'll know how tricky it can be to boost your honor up to maximum level, and this is just as much of an issue in Red Dead Online – but thanks to the method we're going to detail here, you can quickly rewire your moral compass if you'd prefer a simple transaction instead of anguishing over every decision you make.

Being able to switch your morality in Red Dead Online is particularly useful, because the story is different depending on your current moral state. If you've been a law abiding citizen, then you can take on the Gunslinger set of missions, while the Outlaw missions are there if you prefer to be a rascal. To switch your morality in Red Dead Online at the press of a button – literally – you need to visit Old Man Jones. Ol' Jonesy is a special vendor that absolves you of your sins and will let you try out the other story missions, and here is how to find him.

Where to find Old Man Jones

Jones is always a feature on your map in Red Dead Online, regardless of what server you’re in. We found him south of Armadillo, but his placement is totally random. We’ve seen him near Riggs Station and in the Lemoyne area before, so simply navigate to your map screen and hit Square/X to bring up the index. You should see the prompt for ‘Old Man Jones’ in the list designated by a red and white honor icon, the one you’re used to seeing along the bottom bar when you hit down on the D-Pad.

How to switch your morality via Old Man Jones

This crusty, mysterious old man has a suite of interesting wares adorning his camp, including the mysterious green mask that kicked off the ‘Undead Nightmare’ in the first Red Dead Redemption. Spooky.

To switch morality, all you have to do is simply walk up and hold L2/LT to initiate the conversation. You will see the prompt in the lower right corner, asking you to hold the Triangle/Y button to switch your morality from honorable to dishonorable and vice versa.

The catch is that this service offered by Old Man Jones costs three Red Dead Online Gold Bars. Now, Gold Bars are the in-game premium currency, the resource you can purchase with Red Dead Online microtransactions for real money. If you'd rather not spend any cash, you can collect Gold Bars over time by receiving fractions of them, known as Gold Nuggets, via treasure chests or completing online missions and activities.

Alternative ways to switch your morality

If you’d rather keep your hard-earned Gold Bars, there are other options to switch up your morality. If you’re bad trying to be good, make honorable choices in missions and spare gang leaders at hideouts. Act with decency and invade free roam events to tip the tides against a dishonorable posse, as and when you’re prompted.

It’s far easier when the shoes on the other foot. If you want to lower your honor, just follow the same criteria as the story mode. Trample and murder NPCs and other players. Kill defenceless animals and livestock. Shoot some horses, raze a cosy town, basically give the Old West a baptism of fire and you’ll be a menace to society in no time.