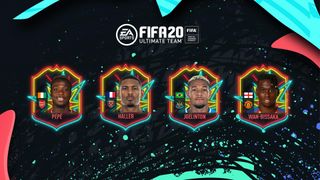 There's still a month to go until the FIFA 20 Ones to Watch winter upgrades arrive, so in the meantime we've got the complete list of FIFA 20 OTW cards already in the game. There's plenty of special cards to be had in FIFA 20 and all of the Ones To Watch cards upgrade every time that player is featured in the Team of the Week. This can make them a very tempting and promising investment indeed, even if you don't use them in your team, so check out the full list below to see which FIFA 20 OTW cards you can obtain.

FIFA 20 Ones To Watch

FIFA 20 OTW cards will be available from September 27 - October 7 only, which is essentially the 10 days following the launch of the game. These players have stats that will improve throughout the season whenever they receive upgraded special cards like Team of the Week, Man of the Match, Hero, or any of the other possible options, and as a result, they sell for considerably higher than their normal variants.

FIFA 20 Ones To Watch are decided by the highest potential players that have made a transfer in real life this summer. For example, Eden Hazard moved from Chelsea to Real Madrid and since he's one of the best players in the world, he's earned a OTW card. Here's the full list of 23 confirmed FIFA 20 Ones To Watch:

So there you have it, everything we know about the FIFA 20 Ones To Watch. Keep your fingers crossed for some good pack pulls!