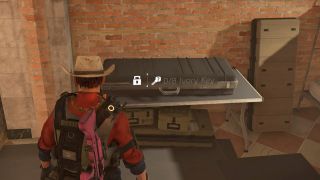 You're introduced to Division 2 Ivory Keys right from the start of the game, as there's a crate inside the White House that requires eight to unlock. Thing is, you won't stumble upon any Division 2 Ivory Keys whatsoever when playing the game normally. You need to hunt down and kill 12 high-level bosses called hunters, and each one has a cryptic riddle to solve before you can. If your goal is to collect everything in The Division 2 then you've come to the right place, because we've got everything you need to know about opening the crate and obtaining eight Division 2 Ivory Keys.

What are Ivory Keys used for in The Division 2?

If you've got your hands on an Ivory Key but you're not sure what it can be used for, worry not. The Ivory Keys are used to unlock the box in the White House pictured above. It requires eight of them to open in total, and we do know what's inside the locked box but we'll leave that till the end of the guide so we don't spoil it.

To find this locked box, enter through the main White House entrance, walk past the Quartermaster and Vendor, then take a right. This is where the Barber will be once you get him, and it's also where you can find the locked box, on a small table.

How to get Ivory Keys in The Division 2

Actually obtaining eight Ivory Keys to unlock this box full of wonder is easier said than done. You have to take down Hunters, which are level 35 secret bosses and nigh-on impossible to find without a guide. As I write this, there's a lot of confusion around how to obtain all eight Ivory Keys, so I'll attempt to shed some light on the situation.

Before the first major Division 2 patch on launch day (Friday, March 15), it was possible to obtain eight Ivory Keys by jumping into another person's game and killing the Hunters that you'd already killed in your own game. This meant that you could farm the same few Hunters multiple times, and earn eight Ivory Keys that way. This method has since been patched out.

Killing Hunters in somebody else's game will not reward you with an Ivory Key - although you will get other high-end loot - so you have to kill eight different Hunters in your game. While there's 12 Hunters you have to kill to obtain all 12 masks, only one Ivory Key will drop per encounter for a total of eight.

Which Hunters do I need to kill to get Ivory Keys?

We've covered how to kill all 12 hunters in our guide to the Division 2 masks, and doing so will reward you with eight Ivory Keys. Only the final hunter you kill from the Midas/Revenant and Death/Phantom/Cross/Diamond encounters will drop an Ivory Key.

If it's your first time taking down the hunters, no matter who the leader of the group is, you should get an Ivory Key. There's still some confusion surrounding this though so if anybody in your group doesn't get one Ivory Key for each hunter encounter, that player needs to invite all the players to their group then kill the hunter again.

What do you get in the box that needs eight Ivory Keys?

Of course, obtaining eight Ivory Keys in The Division 2 isn't really worth it if the rewards are naff. If you want to find out the contents of the box, take a look at the image below. If you don't, we'd recommend scrolling back up the page!

You'll be able to get your hands on the Shield Splinterer - F2000 assault rifle. We recommend waiting until World Tier 5 before opening it, so you receive it at the highest gear score possible. You'll also obtain a white weapon skin, and the Hunter's Axe backpack trophy. If you use assault rifles then this F2000 is more than worth it, but if not... it's still cool to keep in your stash.

Are you completely lost with this and still getting started with The Division 2? Check out our guide to The Division 2 tips, straight from the developers themselves.