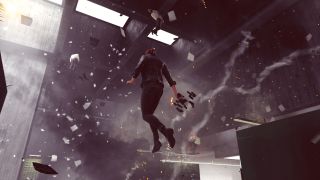 The information about Control coming to Xbox Game Pass as reported on a recent Mixer stream is incorrect. We have no news or announcements regarding Xbox Game Pass at this time.December 5, 2019

Original story: Control could be arriving to Xbox Game Pass as the next big free title for Microsoft's Netflix-style subscription service, according to head of Xbox, Phil Spencer.

Speaking on a recent Extra Life charity stream, Spencer was asked about his favourite games of 2019. "I thought Control was really good", he answered. "It didn't reach enough people, so I'm glad to see that it's coming in to Game Pass, so hopefully more people will play it because it's a game that should be played from our friends at Remedy."

Sounds like Control is coming to Xbox Gamepass according to the guy who owns a Scarlett consolehttps://t.co/7xX5ZmUakA (~44min) pic.twitter.com/QQCa3fHWUoDecember 5, 2019

Microsoft itself hasn't revealed anything officially regarding Control's impending launch on Xbox Game Pass till now, meaning either Phil Spencer has accidentally leaked his own company's announcement, or is mistaken, and the game isn't coming to the service after all. The man did just get to take Xbox Project Scarlett home with him as his new primary console, so he's probably very excited right now, bless.

We'll likely found out something soon now that Spencer's comments are out in the open, but the idea of Control hitting Game Pass in the near future is certainly exciting, especially as it's one of the highest rated games of the year, and only released worldwide in August.

In any case, if you own an Xbox One and have been considering whether to pick up Control or not, maybe hold off for the next few weeks until we heard something more concrete from Microsoft itself...

If you're new to Control or you're running into trouble, use our Control tips to master the dangers of the Oldest House.