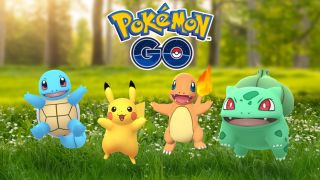 There's so much to do in Pokemon Go, if you're not sure where to start or you need some help with any aspect of the game then you've come to the right place. Our Pokemon Go guide covers everything from the complete Pokedex and all of the shiny Pokemon in the game to Team Rocket, raids, trading and more. Read on for the ultimate Pokemon Go guide.

If you want to be the very best, like no one ever was, then you should take some pointers from experts in the field. We've put in hundreds of hours to bring you the essential Pokemon Go tips you need to know to help you catch 'em all.

The ability to trade Pokemon has been requested since the game first launched, which isn't surprising as it's been a feature of the series since the Gameboy originals. The good news is that Pokemon Go trading is possible, but you'll need to meet certain criteria before you can start swapping Pokemon with your pals, so check out our guide for all the details.

In every month, there's a designated Pokemon Go Community Day where a specific Pokemon will appear with hugely increased frequency for a set three hour period. Keep checking our regularly updated guide to find out which Pokemon will feature, the time and date they'll appear, plus tips for which items to bring for your best chances of capture success.

Every month, there are a number of Field Research tasks available, which are basically quests you obtain by spinning Poke Stops. By completing enough of these tasks you'll achieve a Research Breakthrough to encounter a legendary Pokemon, and we're regularly updating our Pokemon Go Field Research guide with all the current tasks and rewards available.

Catching a shiny Pokemon is a highlight for any trainer as they're so rare, with only a 1 in 450 chance that a Pokemon you catch will be a shiny - if it even has a shiny version, as not all of them do. The good/bad news (depending on how you look at it) is that there are over 150 of them to find, so check out our complete Pokemon Go shiny list for everything you need to know.

How to catch an Aerodactyl in Pokemon Go

If you're working your way through the Let's Go Meltan task then you'll be wondering how to catch an aerodactyl in Pokemon Go. It's one of the stages of the research task while it's not technically hard, it can be a pain so read up up everything we have here to make life easier on yourself.

How to catch a Spinda in Pokemon Go

Spinda is an elusive Pokemon which has over 20 variations thanks to its different patterns, which may sound excessive but compared to the frankly crazy four billion variants in the main games it's a drop in the ocean. To get started you need to find a specific Field Research task, and we've got all the details for how to catch a Spinda in Pokemon Go.

Pokemon Go Regionals are specific Pokemon that are exclusive to certain regions of the world. Unless you're an international jet-setter then you may not encounter many of these Pokemon Go regional Pokemon, but handily they can be traded and we've got all the information on their locations in our guide.

Raids are battles with oversized 'boss' Pokemon that take place at gyms, and you may need to team up with a group of friends in order to defeat them. These raid bosses change every month, so pay a visit to our Pokemon Go raids guide to find out which battles are currently available and pick up tips for these tough foes.

Sinnoh Stones are a type of special item which are pretty hard to come by, as they can normally only be obtained by completing Research Tasks or in PvP battles, though some Community Day events have also yielded them. They are required to evolve certain 4th gen Pokemon, so check out our Pokemon Go Sinnoh Stones guide to see how to get them and what evolutions they are for.

While Sinnoh Stones are for Gen 4, Pokemon Go Unova Stones are used for Gen 5 Pokemon and we've got the details on how they work and which Pokemon you can evolve with them.

Legendaries are some of the hardest Pokemon to catch, which shouldn't come as much of a surprise to experienced trainers. To make completing your collection even tricker, not all of the Pokemon Go Legendaries are available at the same time, but if you follow our guide we'll show you which ones are currently around and offer advice on how to bag them.

Evolution items, or special items as they're also known, come in six different varieties - Metal Coat, Sun Stone, Dragon Scale, King's Rock, Up-Grade, and Sinnoh Stone. They are used to evolve specific Pokemon into new forms, along with plenty of candies, and our Pokemon Go evolution items guide will explain how each of these items is used.

How to catch a Ditto in Pokemon Go

Ditto can be a really frustrating Pokemon to try and catch, as if you don't have luck working for you then it can take a long time to find success. This is due to Ditto being a mimic, so you can't see it in the wild as it takes on other forms, but if you want to know how to catch a Ditto in Pokemon Go then we've got plenty of information about its disguises and techniques to track it down.

How to catch Mew and Mewtwo in Pokemon Go

If you were a collector of the original 151 Pokemon, you'll know just how important it is to add Mew and Mewtwo to your Pokedex. This is a tricky process however, involving an eight-stage quest just to grab Mew, but our guide will show you exactly how to catch Mew and Mewtwo in Pokemon Go.

How to catch Celebi in Pokemon Go

Adding the elusive Celebi to your Pokedex is another multi-step process, where you'll need to complete eight stages of Special Research tasks in order to track it down. There's a lot to do and you'll need plenty of time and distance, so pull on your walking shoes and we'll show you how to catch Celebi in Pokemon Go.

The Pokemon Go A Thousand Year Slumber special research is the one you need to complete in order to get Jirachi, and our guide tells you exactly how to do that.

How to catch Smeargle in Pokemon Go

It took a while to arrive, but the wait is over and the final Gen 2 Pokemon Smeargle has arrived in Pokemon Go. This cheeky canine loves to photobomb your pictures, so you'll need to use Snapshot Mode to draw it into the wild, and we've got all the details in our how to catch Smeargle in Pokemon Go guide.

How to catch Meltan in Pokemon Go

If you want to grab a Gen 8 Meltan then there are a couple of methods you can use. If you have Pokemon Let's Go then you can get Meltan by transferring any Pokemon over from Pokemon Go, or if you don't have access to the Switch game you can complete a nine stage special task instead. Either way, our how to catch Meltan in Pokemon Go guide will give you all the information you need.

Leafeon and Glaceon are the two fourth generation Eevee-lutions, but they're not acquired in the same method as the other 'eons. If you're wondering how to get Leafeon and Glaceon in Pokemon Go, we've got an entire guide dedicated to that subject for you.

Over three years of Pokemon Go, the Pokedex has continued to expand, now covering four generations and close to 500 Pokemon in total! Keeping track of all those individual Pokemon and their evolutions is a big ask, which is why we have our Pokemon Go Pokedex guide to lay out every one of them for you.

When you first started out in Pokemon Go, you had to make the difficult choice between Team Mystic, Valor, or Instinct. Previously, you were locked into this decision for the long haul, but thanks to the introduction of the Team Medallion you can now switch sides if you like - though you'll have to play a price. For all the details on how to get a Team Medallion and what you need to do with it, here's how to change team in Pokemon Go.

Towards the tail end of 2019, Team Rocket invaded the game and took over a bunch of Poke Stops. We've got all the details you need on how to fight back against Pokemon Go Team Rocket.

Alongside Team Rocket, you can also get Pokemon Go Mysterious Components now, which you can build into a Rocket Radar. Not sure what we mean? Check out our guide.

How to beat Giovanni in Pokemon Go

Eventually, you'll come up against Giovanni, the leader of Team Rocket. Check out our guide on how to beat Giovanni in Pokemon Go for some tips on taking him down.

Pokemon Go Looming in the Shadows

The Pokemon Go Looming in the Shadows special research also involves Team Rocket, and our guide will help you complete it.