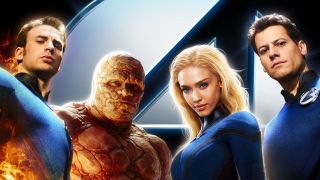 The Fantastic Four are coming to the MCU. No, that's not a typo. Kevin Feige confirmed as much during the blowout mega-movie announcement at Marvel's SDCC 2019.

At the end of the panel, Feige had one more ace up his sleeve, revealing that a Fantastic Four movie set in the Marvel Cinematic Universe is on the way, as well as mentioning Black Panther 2, Guardians of the Galaxy Vol. 3, Captain Marvel 2 and Blade. No word just yet on any casting or release dates. Yet, even without that information, just the fact that a formerly Fox-owned property is coming to the MCU has fans everywhere very, very excited.

Fantastic Four has had a tough time of it in theaters over the years. Its original series (starring a pre-Cap Chris Evans) eventually fell by the wayside, and Josh Trank's reboot was a certified box-office bomb. It's been left to Kevin Feige and Marvel Studios to pick up the pieces with Reed and Sur Richards, Johnny Storm, and The Thing. Disney, for those unaware, now own Marvel's Fox superheroes to use in their own universe, including the Fantastic Four, X-Men, and Deadpool.

Feige also teased "mutants" in his final address. Let's leave that thread dangling there for a little while... Fantastic Four, however, is confirmed for the MCU. Rejoice!

During the same Hall H panel, Feige also revealed that The Eternals, Shang-Chi and the Legend of the Ten Rings, Doctor Strange in the Multiverse of Madness, and Thor: Love and Thunder are all coming to cinemas within the next few years. Read all about the Marvel SDCC panel here.