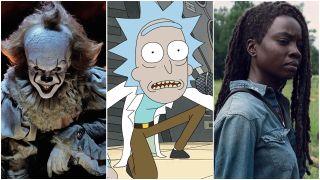 The San Diego Comic Con 2019 trailers came thick and fast. Footage from Rick and Morty season 4, The Walking Dead season 10, and even Top Gun" Maverick previewed at the event.

It was a lot to take in, and you may have missed a trailer or two. But, of course, we don't want that. We combed through every panel, every event, and every internet-breaking announcement to bring you all the San Diego Comic Con 2019 trailers that you absolutely have to watch.

Here are all the San Diego Comic Con 2019 trailers that everyone is talking about.

The first trailer to show at San Diego Comic-Con 2019 was for It: Chapter 2. For a couple of hours, the trailer was unavailable online. However, Warner Bros have since made the footage available globally. Watch the creepy clown Pennywise above.

Who doesn't love a surprise? Tom Cruise flew on by San Diego Comic-Con to drop off the first teaser trailer for Top Gun: Maverick. "I was always asked ‘When are you going to do another one?’" the actor said on stage. "Well, you’ve been very patient with me. I felt like it was my responsibility to really deliver for you."

Arnie's back, once again, as the Terminator. And the former Governor of California was kind enough to swing by San Diego Comic-Con to show those lucky fans in Hall H some new footage from Terminator: Dark Fate. Unfortunately, that footage has not been made available online. However, our team on the ground were at the panel and you can read their description of the footage here.

Arriving a day earlier than scheduled is the Cats trailer. There are no words to describe the weirdness of the whole thing: why Ian McKellen, Judi Dench and Idris Elba signed up for this is anyone's guess. Yet, the Cats movie exists, it's happening, and you should definitely watch the trailer right now, if only just so you can trawl through Twitter after this and enjoy all the great Cats memes.

The first adaptation of Phillip Pullman's fantasy series, The Golden Compass, may have stumbled out of the blocks back in 2007, but this joint HBO/BBC production is looking like it'll more than make up for it. As the trailer proves, the colourful chaos can't work without a stellar cast, and His Dark Materials has it in abundance: Logan's Dafne Keen, Ruth Wilson, James McAvoy, The Wire's Clarke Peters, and Lin-Manuel Miranda all star.

SDCC always seems to bring the goods. The Jay and Silent Bob reboot trailer is here, and the reunion is as delightfully silly and juvenile as you could have hoped for. Some famous faces have cropped up too. Is that Chris Hemsworth?!

Creepshow is getting a macabre makeover. Based off the 1980s film series of the same name, the new adaptation will be twisted into 12 horror anthology tales. Think Black Mirror mixed with Treehouse of Horror but way scarier and you're along the right lines. It's great to see Scream vet-turned-deathmatch wrestler (seriously, look it up) David Arquette return to his horror roots too.

The gang's all here! Well, not quite. But Taika Waititi more than makes up for it. Yep, he's voicing the purple alien with the unbelievably annoying app in this first Rick and Morty season 4 clip. Take a look now - it's the next best thing to Interdimensional Cable.

The Witcher Netflix series SDCC trailer explodes right out the blocks, and doesn't let up until the very last second. And even then, those final moments feature a creepy-as-heck spider and Geralt's eyes mysteriously turning black. You had our curiosity; now you have our attention.

Where to begin with this The Walking Dead season 10 SDCC trailer? For starters, Alpha and Carol face off in the tensest showdown since Negan sent Lucille swinging for the fences. Then there's that kiss, that boat and -- look, just watch it to find our what you're missing. It's fantastic.

Lest we forget the Walking Dead movies that AMC has planned. In a slight surprise, Rick's journey will be exclusively seen in theaters; no made-for-TV trilogy here, people. The teaser isn't much, but it'll tide us over until we hear more.

While the Russo Brothers may not have announced any new Marvel projects during their Hall H panel, the duo did release a trailer for their forthcoming movie 21 Bridges that stars an Avengers - Black Panther himself, Chadwick Boseman. A trailer for the movie was launched at the event, which you can watch above.

These violent delights have -- you know how it goes by now. The Westworld season 3 SDCC 2019 trailer, though, has thrown us through a loop. This is the fullest look at the outside world thus far, and it looks absolutely beautiful. Now, don't mind us, we're mining the trailer for clues as to what it all could mean.

The new comic book adaptation didn't have an official presence at SDCC this year, though HBO still chose to drop a second Watchmen trailer during the event. Doctor Manhattan is back, and that's just the beginning of the myriad questions we have about the two-minute clip.

Everyone else can go home. The Star Trek: Picard SDCC 2019 trailer may have just stolen the show, Marvel not withstanding. Not only is Patrick Stewart back, but Data and Seven of Nine are too. This looks to be perfect for Trekkies and the non-converted alike.

Not only was the Picard trailer revealed at the Star Wars Universe panel, but also footage from the upcoming Short Treks - an anthology series of short stories following some familiar characters.

Holy forking shirtballs, these bloopers are hilarious - even if no Good Place season 4 trailer means we're (probably) in the Bad Place.

Yes, Marvel's Agents of S.H.E.I.L.D. is still going. In fact, it's getting better reviews than ever, even if the show is so loosely connected to the movies it may as well be set in an alternate timeline.

The Dark Crystal: Age of Resistance

Gelfling and the gang are back in The Dark Crystal: Age of Resistance. The prequel series, which will touch down on Netflix later this year, had a big presence at San Diego Comic-Con, with the first episode being shown at the show's panel. While we are not so lucky as to have the entire premiere, we do have this behind-the-scenes look at the show.

While Ruby Rose may have had to pull out of her appearance at Comic-Con, the audience were still treated to the first episode of her upcoming show Batwoman. For us mere mortals who were unable to attend the event, we instead have the above trailer to enjoy.

Remember when The Expanse was cancelled by Syfy? Yes, it was a dark time, but luckily Amazon were on hand to bring back the show for a fourth season. And now, the first trailer is here for us to enjoy.

Steven's back on Earth, and this time in movie form! The acclaimed cartoon returns September 2 to Cartoon Network - and you can watch the first trailer above.

Jennifer Connelly and Daveed Diggs are on a train that never stops; that's perhaps the most simplistic way of describing Snowpiercer. The new series looks set to be equally as enthralling as director Bong Joon-Ho's 2013 movie - though we could do with Chris Evans coming back for the series. Because who couldn't do with more Captain America in their life?

The Man in the High Castle

All good things must come to an end. The fourth season of Man in the High Castle will be the show's last, and Amazon debuted a short clip from the premiere at SDCC.

The DC Universe streaming service continues to release more and more exclusive content; content unfortunately not available to us in the UK. That's made only more frustrating by how good the animated Harley Quinn series looks.

While Warner Bros may have decided against releasing any new details about their movie slate at SDCC, they did release a spate of trailers for their TV Universe. Watch trailers for the Arrow (coming to an end with season 8), Black Lightning, The Flash and Supergirl above.