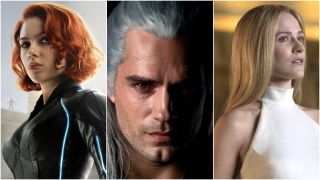 Friday at San Diego Comic-Con 2019 was huge. Trailers for the Witcher Netflix series, The Walking Dead season 10, Rick and Morty season 4 and more were all shown; The Boys was renewed for a second season; the Avengers: Endgame writers revealed how Captain America almost died in the movie; and the Russo Brothers announced their upcoming slate of movies.

Of course, there's a lot more to come. And you want to keep on track of everything happening at San Diego Comic Con, right? Well, you're in luck. Below, we have the full SDCC 2019 schedule, plus dates, times, and all the panels you need to know about across the next three days. Not only that, but we've got the lowdown on why San Diego Comic-Con 2019 streams might be hard to come by. So, if you were planning on figuring out how to watch SDCC 2019 in the US and UK before the big panels, you're probably going to be sorely disappointed. More on that below.

Of course, it's not easy going through the entirety of the San Diego Comic-Con 2019 schedule. With that in mind, we've cherrypicked the best SDCC 2019 events that you need to know about. We've even got UK SDCC 2019 times prepared for those across the pond who are already anticipating a bleary-eyed weekend.

So, what are you waiting for? Dive into the SDCC 2019 schedule now and start planning out your weekend. With the likes of Hideo Kojima, Westworld season 3, and The Walking Dead season 10 all rocking up to San Diego, this year's pop-culture phenomenon is bound to be utterly unmissable - and your access to all of the shocks and surprises that are in store starts right here.

San Diego Comic-Con 2019 started on Thursday, July 18, and runs through until Sunday, July 21. There was also a preview night on Wednesday, July 17, filled with premieres and pilots. This year’s offering included the world premiere of the new live-action Batwoman and Pennyworth shows.

As you’ll soon see below, the big-hitters are on Friday and Saturday, with Thursday being very much a warm-up for the main event, and Sunday being effectively a rest day in terms of panels.

But what should you care about amongst the dozens and dozens of panels across the weekend? We’ve pieced together the main San Diego Comic-Con 2019 panel schedule below.

Note: click on the hyperlinks to find out exactly what happened at each event.

Unlike the infinitely more open E3 2019, San Diego Comic-Con 2019 streams aren’t as readily available. I know, I know. It sucks. If the pattern of last year is followed, everything will be a behind closed-doors affair. Unless you have a ticket to, say, Marvel Studios in Hall H on the day, you won’t be able to watch the event live.

Even so, there’s plenty of reasons to keep track of the San Diego Comic-Con 2019 schedule. That’s because we can expect several social media-adjacent reveals as each panel and conference is going on. So, if Marvel Phase 4 is being revealed on a certain time and on a certain day, for example, then you should be endlessly checking the official Marvel Studios Twitter account. GamesRadar’s troops on the ground at SDCC will also be posting exclusive stories from each event to give you a behind-the-scenes look at what’s going on, so be sure to keep refreshing the GamesRadar Twitter account, as well as the SFX and Total Film Twitter accounts. That's almost as good as getting your hands on a press pass yourself. Almost.

Yes, Marvel Studios is at San Diego Comic-Con 2019. It’s on Saturday, July 20 at 5:15pm Pacific time (1:15am on Sunday morning for those in the UK). Trust Kevin Feige and company to keep things under wraps until the very last minute. A Phase 4 blowout reveal is almost a certainty. Get the full lowdown with our complete Marvel San Diego Comic-Con 2019 preview.

Yep. He’s back. While Arnie hasn’t been confirmed as of writing for the Terminator Dark Fate SDCC 2019 panel, expect him to show up alongside Linda Hamilton and, potentially some brand-new footage.

Xbox has the skinny on the upcoming Gears of War panel: "Join the developers and minds behind the Gears of War Universe as they discuss the past, present, and future of this storied franchise." Gears' foray into wider media may be discussed here, including the untitled Gears of War movie.

BBC and HBO are combining forces for what is promising to be a brilliant adaptation of Phillip Pullman's epic fantasy trilogy. With the show due out later this year, expect a blowout filled with cast members, trailers, teasers, and maybe even a proper release date.

Christopher Markus and Stephen McFeely sure love to talk about Avengers: Endgame – and they have their biggest platform yet on the Friday. Hopefully, we will find out about some more Avengers: Endgame deleted scenes, and maybe even get some other interesting tidbits that never quite made it onto the big screen. One to watch, for sure.

Following on from Markus and McFeely’s own panel, the Russos are in town to make this a real one-two Endgame extravaganza. Deadline is reporting that a reunion between the cast is also a possibility here, so expect a final hurrah between the likes of RDJ and Chris Evans. I can’t wait 3000.

The Walking Dead’s baby brother is making its presence known at SDCC 2019. The spin-off has caught the attention of many a main series fan in recent months with the introduction of the staff-wielding Morgan. Actor Lennie James, who plays Morgan, will be at the panel, as will Scott M. Gimple, the head honcho in charge of all of The Walking Dead’s current TV output.

Let’s get schwifty! Rick and Morty season 4 is dropping later this year and we could very well be getting a quick peek at some footage at SDCC 2019. Dan Harmon and Justin Roiland will be in attendance, as will voice actors Sarah Chalke, Spencer Grammer, and Chris Parnell. We've already had a drip-feed of info: Rick and Morty season 4 first images have been unveiled, as has an episode count. Could a release date be next in the lead-up to the panel?

Of course, we can’t forget about The Walking Dead season 10. That’s right, AMC’s smash zombie hit is close to celebrating a decade of death and decapitation, and it’s sure to pull out all the stops at SDCC 2019. While Andrew Lincoln isn’t confirmed (never say never), the likes of Danai Gurira, Death Stranding alumni/Hideo Kojima BFF Norman Reedus, and Jeffrey Dean Morgan will all be there. Maybe we’ll get a first look at The Walking Dead movies for good measure.

Fingers crossed for a trailer. There’s been no confirmation yet about who’s showing up for the Witcher Netflix series SDCC 2019 panel, but expect Henry Cavill to be in attendance, as well as showrunner Lauren S. Hissrich. The first Witcher Netflix series images arrived earlier in July – and we've also had our first look at Roach now, too. Keep an eye on the official Netflix Twitter account throughout the panel.

DC and Marvel don't always dominate the conversation when it comes to superheroes. The Boys, which sees suited-up heroes embrace their newfound fame, is an upcoming Amazon series that’s set to be premiere at the end of this month.

The Dark Crystal: Age of Resistance

Netflix isn’t just showing off The Witcher. The Dark Crystal revival is picking up pace and, with a voice cast that features the likes of Lena Headey and Taron Egerton, this is one panel not to be missed.

Love it or hate it, Game of Thrones season 8 certainly stirred up some strong opinions. In one final hurrah to SDCC, Westeros’s finest, including Maisie Williams, Nikolaj Coster-Waldau, and Isaac Hempstead-Wright, will take to the stage for what could be a fiery panel. Showrunners David Benioff and D.B. Weiss were originally confirmed but they, along with director Miguel Sapochnik and actors Iain Glen and Nathalie Emmanuel, won't be attending the Game of Thrones panel. However, in their stead, don't be surprised to see a Game of Thrones prequel TV show tease or two from the event or the HBO Twitter account.

The Star Trek franchise is about to boldly go where it hasn’t gone before. It has three shows in development or currently ongoing – Star Trek Discovery, the Picard series, and Star Trek: Lower Decks – and it’s going to show them all off at SDCC 2019. Expect fireworks, and maybe a Sir Patrick Stewart zinger or two.

This is the bad place? Why? The afterlife-themed comedy is ending after its fourth season. Prepare for tears and some holy forking shirt moments galore come Saturday lunchtime.

Robots, bitch! Westworld season 3 not only has Aaron Paul along for the ride (and present at the SDCC 2019 panel) but the mind-melting sci-fi series has plenty of cliffhangers left to deal with. A trailer and a potential release date are both surely on the cards. The official HBO Twitter account should also be refreshed constantly during the event, just in case it springs a surprise reveal on us.

This could mean nothing, or it could mean everything. Who knows? After all, it is Kojima. Death Stranding will undoubtedly be a hot topic of discussion but, weirdly, it's on at the same time as Marvel Studios' panel. Typical Koj. Norman Reedus, meanwhile, is in town for presumably his The Walking Dead panel, but he could always turn up here to divulge more about his upcoming role as Sam the Baby Courier (that's his official name now. Honest.)

This is it. Marvel Studios is pulling back the curtain on its upcoming slate of movies. Expect Phase 4 announcements, Kevin Feige’s baseball cap, and maybe a few shocks and surprises across the 90-minute event.

There are no major TV and film-based panels on Sunday! Check the full SDCC 2019 schedule link above for more events covering everything from comics to cosplay.

There are three notable absentees from SDCC 2019. Sony isn’t there, so don’t expect word on a Spider-Man: Into the Spider-Verse sequel, nor the upcoming Uncharted movie. Universal is also taking the year off, though we could probably expect a screeching return when Fast and The Furious 9 lands next year.

Finally, Warner Bros. (and the DCEU) will be missing from SDCC 2019. That hasn’t stopped people from donating to a banner demanding the Snyder Cut being flown over the event, though.

Keep checking back here throughout the week - you never know what changes might be made to the San Diego Comic-Con 2019 schedule.