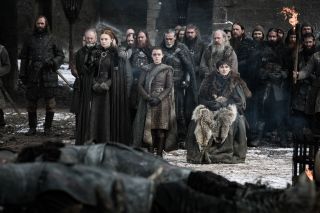 Despite Game of Thrones having finished earlier this year, the show's cast diligently appeared at San Diego Comic-Con's Hall H to discuss the final season. Unfortunately, no recording equipment was allowed inside the hall, but the Total Film team was on the ground reporting back to us over here at Gamesradar. So what happened at the Game of Thrones SDCC 2019 panel? Look no further, as we have all the answers below.

“Someone left some coffee cups here”

Coffee cups all round as (final) Game Of Thrones panel takes to the stage at #SDCC2019 pic.twitter.com/FoVA3fVCI1July 20, 2019

It was perhaps the most infamous blunder of the entire series: a coffee cup appearing next to Daenerys Targaryen at the feast of Winterfell.

As the Thrones cast appeared on stage at San Diego Comic-Con, the stage was lined with coffee cups. Luckily, they all saw the funny side, with one member of the cast saying: “Someone left some coffee cups here.”

While some of the fan base may have not been enamoured by the end of Game of Thrones the majority of the cast seemed quite happy with how their own characters concluded the series. Nikolaj Coster-Waldau, who played Jaime Lannister on the show, said it was "perfect for Jaime to die in arms of Cersei." He also joked about how HBO were planning on remaking the entire final season, before adding: "Whether you loved or hated the ending... don't call people names!"

Samwell Tarly actor John Bradley, speaking about his final scene, said that “one of the nice things about that final scene was I felt, personally, that you wanted to stay with them.” He went on to say that he imagines Westeros is probably more like The Office than the bloodbath we're used to. Meanwhile, Jacob Anderson reckons his character Grey Worm is "sitting on the beach, sipping pina coladas."

Conleth Hill, who appeared as Varys throughout the show's eight seasons, said: "For the record, I loved all my 10 years on Game of Thrones... if you take one thing from show, it's the pointlessness of war." Hill also spoke about his character's death scene, when he was burnt to a crisp by Dany's dragons. "I swear the dragon thought twice about it," he joked.

There was lots of talk throughout the panel about how the show brought people together. Considering how huge Game of Thrones was, they're not exactly wrong.

“We and you - we’re all on this journey together... all of us here feel blessed to be a part of it,” Liam Cunningham (Ser Davos) told the crowd. The actor also joked that he should have ended up on the Iron Throne, adding: "I'm not Ser Davos any more, I'm Lord Davos!" Cunningham also said that they should do a spin-off called Better Call Davos.

During the final episode of Game of Thrones season 8, it certainly seemed like Greyworm wanted to murder Jon Snow for killing Dany. Jacob Anderson begs to differ. "Grey Worm didn't necessarily want to kill Jon Snow," he told the audience. "He just didn't want him to live!" Well that clears that up then.

Anderson was also asked whether Grey Worm would end up finding love post-Missandei. "What's the right answer?" he asked the crowd, before coming to his own conclusion: "No. I think that was a one time deal."

While the show was airing, there was a lot of discussion about whether Bran should have used his powers to see into the future and save mankind some hardships against the Night King. Isaac Hempstead Wright clarified that he believes Bran cannot see into the future like he can the past. As to whether Bran knew he would become king by sitting back and doing nothing, the actor he “thinks it’s a kind of cool idea.” He added: "There's not going to anyone succeeding Bran for a couple of thousand years!"

Another controversial point from Game of Thrones season 8 was Arya being the person to kill the night king. “She did that on her own," Maisie Williams says, "but if we we’re to give credit to anyone it would be Melisandre.” Melisandre did, after some retconning, foresee that Arya would kill someone/thing with blue eyes.

Speaking of Maisie Williams, the actress revealed her favourite line of the entire series: "Not today." Cunningham also revealed his favourite line: “Nothing f*cks you harder than time." Conleth Hill's favourite line? "I drink and I know things." and Hempstead Wright's? "Chaos is a ladder."

The cast were also asked what memorabilia they stole from the set. Hempstead Wright apparently only took "a wooden spoon" with him. Williams took a load of fake blood and "left it all over my trailer.” Hygienic. The best response came from Conleth Hill: "What did I steal? The scenes I was in!"

John Bradley on water bottle-gate: "I'm right-handed... the bottle was on other side. I think I've taken enough blame!" #GameofThrones #SDCC2019 pic.twitter.com/e2qlJEo8ySJuly 20, 2019

Another infamous Game of Thrones blunder came during the last episode, when fans spotted a water bottle by Samwell Tarly's chair. John Bradley is taking none of the blame, explaining that if it were his water bottle it would have been on the other side, because he's right handed.

We will miss you

With Game of Thrones having come to an end, fans will no doubt miss watching the adventures of Arya, Greyworm, Ser Davos and the rest. But what will the cast miss about the show?

"The golden hand," said Coster-Waldau. Maisie Williams says she will miss the swords fighting. Jacob Anderson says that, while Greyworm has such a calm mind, his own is reckless, so he will miss that element of the character. Similarly, Hempstead Wright will miss the stillness of his character, calling playing Bran like "meditation".

Head over to our SDCC 2019 trailers hub to see all the footage that has debuted at this year's event, and take a look at the San Diego Comic Con 2019 schedule so you know exactly what to expect in the days ahead.