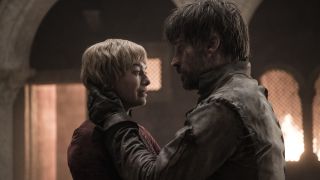 For all the goodbyes we were given in Game of Thrones season 8, one hit harder than most – and proved incredibly controversial, even for the HBO fantasy hit that was built on controversy.

Jaime Lannister shuffled off his mortal coil underneath a pile of bricks and in the arms of his sister-slash-lover, Cersei, during the pentultimate episode of the final season. There was no honourable death for the Golden Lion, and even the actor who portrayed him, Nikolaj Coster-Waldau, told the audience during the Game of Thrones SDCC 2019 panel that he felt the abrupt ending was "perfect."

With thanks to our roving team of reporters at our sister publication, Total Film, Coster-Waldau said that it was "perfect for Jaime to die in the arms of Cersei."

The Danish actor also had a pointed message for those fans who were less than pleased with how Game of Thrones stuck (or didn't stick, as the opinion may be) the landing: "Whether you loved or hated the ending," he said, "Don't call people names."

Coster-Waldau also recently aired his grievances towards certain members of the fanbase, declaring that the cast and crew "worked [their] asses off."

It's clear that he's coming down on particularly outspoken feedback like a tonne of bricks (sorry), but has absolutely no regrets over how his character bowed out. Jaime Lannister, after all, ended his watch as it began: side-by-side with the one he loved most in the world. It wasn't a pretty ending, but some endings often aren't, especially in the world of fire, ice, and dragons. Catch up on everything the Game of Thrones cast spoke about at SDCC here.

Keep on top of all the comings and goings at SDCC with our San Diego Comic Con 2019 schedule.