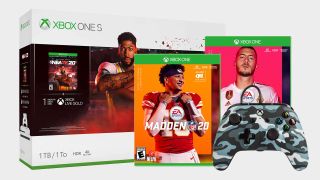 'Tis the season to get a cheap Xbox One deal, it seems. Now that Black Friday game deals fever is hotting up, Walmart's breaking cover early and offering a $299 mega-bundle that gives you an Xbox One S console with NBA 2K20, two free games (Madden 20 and FIFA 20), and a free wired controller as well. Because the Xbox One S usually goes for around $299 by itself or with one game, this is great value for money. In fact, it totals to almost $80 off and becomes one of the best Xbox One S bundles we've seen this month. It isn't likely to be beaten until the highly anticipated Xbox One X Black Friday sales kick in, either, and even then it'll give a lot of those offers a run for your money. If you don't mind spending a little more, you can also upgrade the bonus handset (decked out in camo and made by PowerA) to an official black or red Xbox One wireless controller for an additional $25-$30. Even that's not a bad deal - considering the fact that these retail for $50+ apiece, getting an Xbox One controller cheap can be a tall order.

Cheap Xbox One deals like this make the perfect gift for yourself or a loved one, especially if they're a sports fan. The Xbox One S was already a steal at $299, so getting three games and an extra controller for couch co-op is a real bargain.

Not sure whether you should grab this offer or one of the many Xbox One X deals that will be doing the rounds over Black Friday and Cyber Monday? The difference comes down to power and cost. The Xbox One S is an affordable, more entry-level console that can play all the same games and Blu-Ray discs as the X model (including with HDR), but it's not able to display those games in 4K resolution. Meanwhile, the Xbox One X has greater horsepower for improved visuals and superior load times. It can also play games in 4K Ultra-HD, but you pay for it with a slightly higher price tag. As a result, we'd recommend an Xbox One S if you just want to dabble in games every now and then, as a second console, or if you don't have a 4K TV.

Prefer to hold out for that more powerful console? Make sure you make the most out of it by teaming it with one of the best gaming TVs.