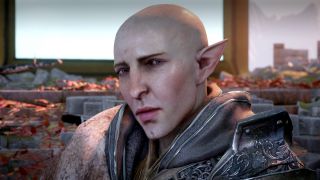 BioWare executive producer Mark Darrah is back at it again by posting a screenshot from Dragon Age 4. Only it's tiny in size thanks to most of the image being, in his words, "slightly redacted." You can make out a tiny square image in the top right corner just above the part that's "super redacted." Needless to say you can't see much, but it‘s apparently a tiny sliver of a screenshot, so you can't say it's nothing, right?

Today is officially Dragon Age Day and fans of the series set in the world of Thedas are expressing their love of all things Dragon Age. Darrah took to Twitter to post the "screenshot," and hey, it's all good humour. Lots of folks have been hoping for some news about Dragon Age 4, and while we know it's happening and that it won't likely come our way until April 2022 at the earliest, we haven't really seen much of it all.

Well, now we've seen a tiny square of Dragon Age 4. It does look there's sort of leaf, or perhaps a branch. Trees confirmed? Oh, and there's a bit of sky. This is far from the first time Darrah has been able to stir up some fun on Twitter. Recently all he did was post Dragon Age and that was enough to cause some excitement. I mean, I don't know about you, but the mere mention of Dragon Age is always enough to lift my spirits. Thank the maker for Dragon Age, honestly. It might not be very big screenshot - and it doesn't really show much of anything - but personally I'm just happy Dragon Age 4 is coming our way in future.

Looking for some great games to play? Here are some games like Mass Effect to keep you busy.