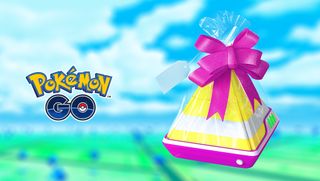 The latest Pokemon Go event is all about Gifts. On the heels of the Pokemon Go Rayquaza raid, today the mobile catch-'em-up launched a Gift campaign which raises the amount of Gifts players can hold and open. The event goes live today and will run through Monday, August 19.

For the next two weeks, Pokemon Go players will be able to open 30 Gifts each day and hold up to 20 at once. Any Eggs you receive from Gifts will also hatch after just 2km, no matter what tier of Egg they are. As Niantic explained in a blog post, "all Eggs received from Gifts during the event will require only 2 km to hatch and look like 2 km Eggs, but don’t worry, Trainers! The Pokémon that hatch from them will be ones that normally appear in 7 km Eggs, regardless of whether you incubate or hatch them during or after the event."

Just as importantly, Eggs opened during this Gift event may yield Shiny Bonsly - who, I want to point out, looks just like the Easter-y Gifts. That's Shiny synergy I can get behind. After Shiny Ralts in the Pokemon Go Community Day and Shiny Rayquaza in the August raids, Bonsly is the third exclusive Shiny of the month, and we're only five days in. August is looking like a good time for collectors.