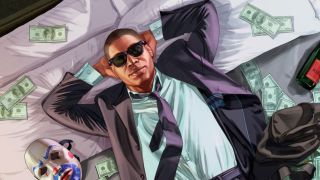 The trick for how to level up fast in GTA Online is to earn as many reputation points (RP) as possible, as this is the levelling system which governs your status in the multiplayer world. Your player rank in GTA Online is so much more that a status symbol, as it also dictates the weapons and vehicles you can buy, the missions you can undertake, what abilities you have available, and a whole lot more. The higher you level up and increase your rank, the more useful items you'll unlock – the last weapon to appear is the minigun at rank 120, while the final ability that allows you to store 10 body armour pieces in your inventory rocks up at rank 135.

You can gain reputation and increase your rank by completing missions and various other tasks, but if you want to level up fast in GTA Online then you need to take part in the right activities – the same approach players would take to simply have fun or mess around like they would in the single player campaign doesn’t apply here. Helpfully we’ve taken the time to pinpoint some tips on how to earn reputation and level up fast in GTA Online, so you can catch up to the people who’ve been logged on since launch day.

Spin the Lucky Wheel in the Casino

Inside the Diamond Casino and Resort you'll find the Lucky Wheel, which you can spin every day for a chance to win one of 20 prizes. Five of these are RP related, ranging from 2,500 to 15,000 RP awards, so you have a 25% chance of increasing your reputation with each spin. If you've already won the Podium Vehicle, then hit the vehicle award slot again before the weekly update refreshes the podium, you'll bank a huge 20,000 RP! Better still, if you want to follow this method to level up fast, you can use the GTA Online Lucky Wheel glitch to have as many spins as you need to hit the prize you're after.

Adversary modes brought crazy new group vs group scenarios where teams would usually play out classic movie scenes, most of which would involve one group surviving an assault from the other. These missions, that are highlighted by the Tron-inspired Deadline, can net you a ton of reputation since they are classified as longer missions. They can bring in thousands of points, and are just crazy fun to play – you’ll need a team though, as they can’t be done alone.

Once you get to rank 12, you’ll be able to retrieve crate drops that happen all over the map. Before it happens you’ll receive a notification on the top right corner of the screen, followed by markings on the mini map that tell you where it’s been dropped. You’ll have to kill a few well armed NPCs that defend the drop, but once you do you could open up the crate to find 3,000 reputation points – some special drops have 5,000 RP. It’s one of the best ways to gain RP, that’s widely agreed upon throughout the GTA Online community.

Every Tuesday Rockstar updates their Newswire with new info and details about events that offer double the reputation. This can include specific mission types or special playlists that they put together for a unique event. No matter what it ends up being, it’s a great opportunity to get extra RP and cash. Checking the Newswire can also give you tips on how to get discounts on certain vehicle purchases and free items, so it’s in your best interest to bookmark that baby.

GTA Online lets you do way more than just petty one-off crimes, it lets you build an empire. Players can buy an office once they have enough money and start their own organization, and other players can then join as associates. This will be a good source of RP since you’ll have access to a group of like-minded individuals that actually want to get stuff done. You can easily earn on your own, but completing missions with a group – including many of the ones featured in this list – will earn you a nice bonus alongside your typical cut.

You can earn up to 500 RP for just completing a race, you don’t even need to win it. This isn’t as much as other missions might net you, but races are over much faster and can be done in quick succession if you want to rack up points quickly. The Criminal Record race can be finished in half a minute if set to only one lap. This is also better suited for starting out since it’s an easier task to tackle, however it’s not recommended once you’ve reached the upper echelon of GTA Online ranks.

While not the most efficient way to build up experience, losing the cops after building a wanted level is a consistent way to earn reputation. Each star wanted level brings in another 100 points, but be careful going for those higher levels since it can be incredibly difficult, or at least time consuming, when trying to ditch a trail that hot. This is also one of the most enjoyable ways to gain reputation since you can do almost anything you want to gain the cops attention, much like the single player campaign. It’s best to gain a wanted level by either stealing a car or killing another player, since both actions will also get you some RP on their own.

Build a playlist with the best missions

Completing missions is the intended way to gain RP, as they’re the bulk of GTA Online and contain all sorts of objectives and play styles. You can compile some of the missions that give out the most RP in a playlist, either by yourself or with a crew, to tackle them efficiently. Remember that missions unlock at certain ranks so you won’t be able to access them all at once.