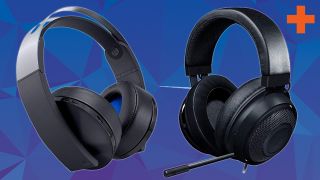 There's nothing better for immersing yourself in a game than with the cans you'll get via cheap gaming headset deals this Boxing Day. Although the best gaming TVs are armed with good speakers of their own, specialist headsets stand head and shoulders above them in terms of quality. That makes them the ideal companion during the holiday season as you dig into games you got over Christmas or missed throughout the course of the year. They're an excellent way to augment your gaming experience.

But what exactly makes cheap gaming headset deals worth the fuss? Besides allowing you to differentiate where gunfire or attacks are coming from (which is beyond useful if someone's sneaking up behind you), the good ones have a broad range that can bring out things in a game's audio you'd never heard before... or make effects feel so much more immediate than they would be otherwise. Little can compare to the boot-shaking reverberations of a nearby explosion heard via a gaming headset, for example.

Whatever game you're playing, be it catching up on behemoths of recent times like God of War or Red Dead Redemption 2 with their exquisite and detailed audio, or even if it's just catching up with friends and enjoying loads of multiplayer madness in Fortnite or Apex Legends, a cheap gaming headset is the way forward. However, the gaming headset market is a saturated one. And this can mean that making a decision on what gaming headset to get and which one is best for you and your set isn't necessarily straight forward. (This is potentially even more so the case when looking to get a cheap gaming headset for someone else.) However, there's good news and it is two-fold: firstly, we are right here and will guide you in the right direction; and, secondly, the prices of some of the best gaming headsets around are likely to come down or at least fluctuate over the holidays as retailers and manufacturers fight for your attention.

So, right here is the best place to peruse the latest and lowest prices on some of our favorite gaming headsets money can buy. We've herded up a handful of the best for each platform, with a handful of PS4 headsets, a smattering of Xbox One headsets, a peak at some Switch headsets, and some of the best PC gaming headsets you can get too. You might see one or two appear in several areas - I'm looking at you Razer Kraken TE - but that just means you can have confidence in something that's really good and compatible with Many Things.

The PS4 has a whole host of great, compatible headsets. I personally love my Platinum headset and it remains my favorite - and often the benchmark to which I compare others. However, Razer and Turtle Beach have staked a big claim in this realm too so you're well covered with this batch that come from our guide to the best PS4 headsets. Quality.

Microsoft's console is well catered for, too. The best Xbox One headsets - some of which are below - will have you fully immersed in any game, bringing it further to life. Plus they're excellently versatile so you can switch to any other device easily and they'll provide the same great experience for music or TV and film.

Selecting one of the best Nintendo Switch headsets could potentially be a bit more tricky - particularly when considering wires and wanting to be tether-free when you're on the go. It is possible however, and there are some cracking wireless headsets that'll serve you well, along with the more traditional plug in ones if you don't mind moving the cable out the way every now and then.

A PC headset for gaming is a very worthwhile addition to your setup despite the excellent PC speakers out there. Plus you'll want a quality set of cans and mic for communicating clearly to your friends online to ensure you deploy your tactics correctly. These sets are really great and will hopefully bag you a bargain this Holiday time.

If you fancy potentially upgrading your gaming setup in the sales make sure you check out how to get one of the best PS4 Pro Deals or Xbox One X deals for console players, and check out the best gaming laptops and best gaming PCs if you prefer a designated gaming PC setup.