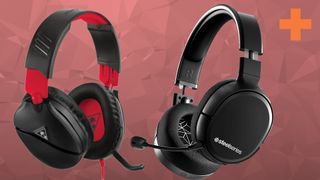 Getting one of the best Nintendo Switch headsets unlocks the true potential of your console. Recent times have seen the launch of a large number of headsets aimed specifically at Switch players, some even offering wireless support for a console that doesn't have built-in Bluetooth. So there's plenty of choice out there, and you often find them included with Nintendo Switch bundles. When you're shopping for a new headset there are a number of factors to consider, and it's that stuff we test for when reviewing each model.

The best Nintendo Switch headsets are all comfortable, and fully adjustable. While it's easy to get caught up in sound quality, the size of the drivers, and the frequency response range... the most important factor is whether you can actually wear the headset for longer than ten minutes without your head feeling uncomfortable. Yes, audio fidelity is a crucial factor too, and the way each headset handles bass and treble, along with any virtual surround-sound is something you should consider. If you play on the go, wireless is also an option, so if you want to keep your gaming set-up clutter-free, it pays to go wireless, even if you need to spend a little more to get it.

Lastly, we recommend looking at the brand you buy. The likes of Steelseries, Razer, Turtle Beach, and HyperX offer specialist gaming headsets with decent build quality, all at reasonable prices. There are loads of cheap, nasty headsets that bring poor sound and will likely break within weeks, so do consider spending a little more on something that'll last you longer.

The best Nintedo Switch headset, and it's wireless too

$89.99
View at Amazon
$99.99
View at Best Buy
$99.99
View at SteelSeries
See all prices (11 found)
Fully wireless for Switch
Lovely, sturdy design
Great sound quality
The cushioning is a little thin on the headband

If you're looking for a Switch headset that's truly wireless and offers superior audio, look no further than the Steelseries Arctis 1 Wireless. A well-built, stylishly designed headset, it brings some fantastic sound to Nintendo gaming (we think it's on a par with the Arctis 7, a fantastic PC headset) and you can usually grab it for around $100 / £100. The headset comes with a USB-C dongle that plugs into the base of your Switch, offering excellent wireless coverage up to about 8m / 25ft. While not perfect, the connection is very good and there's almost zero artefacting or loss of audio even during the busiest games like Mario Kart 8 Deluxe.

In terms of comfort, the Steelseries Arctis 1 Wireless has a padded headband with an adjustable, steel core, and foam earcushions. The padding isn't excessively deep on the headband, but it works well for medium-length gaming sessions (1-2 hours), and while the foam earcushions aren't luxurious they're certainly comfy enough. We'd have liked a little more give where the earcups connect to the headband too, to offer more flexibility, but overall the Arctis 1 is great to wear. The detachable mic works just fine, and is ideal for team play in games like Fortnite. There's even a wire for plugging direct to your Switch, if the 20 hour battery runs down. Overall, it's a superb headset, and the best wireless option for your Switch.

Yes, the Cloud has been around - and winning awards - since all this was fields (*gestures hand). And yes, there’s a very good reason for that. Somehow, time after time, HyperX manages to hit an incredibly attractive pricing while putting together the most comfortable cans on the market, bar none. It all began with Swedish manufacturer QPAD’s QH-90s, which Kingston bought the rights to several years ago. While the sound quality has improved noticeably and the features have grown with every new iteration, the Cloud features the same trademark design, inspired by aviation headsets. What that boils down to is that they’re incredibly comfortable and great and blocking out exterior sound too - useful if you’re on the go.

The sound characteristics of the Cloud Alpha are bassier than we’d usually like, but in this case the low-end power doesn’t come at the expense of high-end articulation. They’re a real all-rounder, as suitable for music or movies as they are for building a perplexing maze around your enemies in Fortnite. Speaking of socially focussed games like Epic’s battle royale: the mic quality is… fine. You’ll have no trouble being heard, but it’s a bit thinner than some other on the list. Streamers should use a dedicated mic instead.

If you're looking to really save cash on a Switch headset, this is your best option. Clocking in at $40 / £30, you get everything you need from a gaming headset in one neat package. A decent mic? Check. A comfy headband design? Check. Efficient 40mm drivers that deliver good gaming sound and decent levels of bass? Check. It even looks pretty good on your head, and the mic can be flipped up to keep it out of the way while you're playing offline.

The drawbacks of the Recon 70 are exactly what you'd expect for the price. It's tuned for gaming, so doesn't transfer as well to movies and TV, although the bassy drivers do mean it's pretty good for most types of music. It's also less comfy for longer gaming sessions of over two hours, which shouldn't be an issue if you use your Switch for commuting and shorter journeys. Aside from these gripes, you're getting a really solid, reliable, and decent performing headset for a bargain price. You'll likely see variants like the Recon 70P and X etc - they're all the same headset, but with slightly different colors for different consoles. Each one works with Switch, via the 3.5mm jack.

The best lightweight headset for Switch

If you’re looking to game on the go without drawing too much attention to yourself, the headsets don’t come much more understated than Logitech’s eSports-inspired G Pro. Gone are the tribal patterns, the seizure-inducing RGB, and the ‘aggressive’ angles that so often characterise gaming headsets. In their place, a monochromatic design with subtle ‘G’ branding on each earcup that wouldn’t look out of place in a high end audio boutique.

Sound quality isn’t quite as luxurious as the kind of audiophile headphones you’d find in said boutiques, but it’s more than up to the job for gaming. If you like a flatter response, the bass levels here might be slightly too aggressive for you, but most people will find the warmth and articulation just right. Perfect for popping on a few tunes after your gaming session. In terms of portability these are a light and robust pair of cans, but they’re not quite as effective at blocking out exterior sound as the Cloud Alpha, so beware the sound of someone loudly eating their Burger King on the table across from you bleeding into your game audio.

A brilliant, high-end Nintendo Switch headset with a fantastic mic

Back into more familiar gaming headset design territory now with the GSP 550, which looks like it fell off an absent-minded Borg’s head and costs the earth. That’s admittedly not the most effusive introduction to a product we’re heartily recommending, so let us explain.

Sennheiser are absolutely brilliant at microphones. You’ll find their pro audio equipment in any recording studio you care to name, and that ultra-high-end expertise trickles down to the gaming headset market beautifully when it comes to small but full-bodied mics. This has been the case for years, but packaged together in this GSP 550 with such incredible sound reproduction, it’s a no-brainer for those looking to take their Switch out to play, and keep chatting to their friends while they do it.

Comfort levels are also surprisingly high, considering there’s quite a lot going on in the design of the GSP 550. Those large earcups do a stand-up job of blocking out invading outside noise, and the headband’s nice and wide to avoid digging in after longer gaming sessions

The best for high-res sound

This is your best bet if you want to put fidelity first. Roccat's Khan Pro doesn't feel like the most luxurious headset on our list, but the build quality and construction materials have come on a long way in recent years for the German manufacturer. And besides, the USP here isn't a pampered scalp, but luxuriated ears.

High resolution audio is a slightly wooly term that's most simply defined as 'anything above CD quality’, or 44,000Hz. In truth it takes something of an audiophile's ear to appreciate the difference, but if you like to combine Switch sessions with music binges with high-res music services like Tidal, the Khan Pro's got your bases covered for relatively little outlay.

These are a light, compact set of headphones too, and although the large Roccat logo does give the game away slightly that these are for gaming, it’s thankfully rendered in dark grey so you can *just about* get away with it on planes, trains, and automobiles, as the case may be.

Best all-round Switch headset, but at a high price

Beyerdynamic, like Sennheiser, are a big name in pro audio. Their studio headphones have been found around the ponytailed necks of sound engineers for many a decade, and their mics in front of many a guitar amp. The Custom GAME is a big deal, then, because it brings much of that pro audio nous to the gaming space.

For starters, the aesthetics are bang on. Taking cues from its DT series of studio headphones, and perhaps a dash of the aviation cans that spawned the HyperX Cloud Alpha, this headset looks subtle, professional, and far more expensive than it is. The headband’s generously padded to keep discomfort at bay, and so are the earcups, which keep exterior sound out brilliantly. The sound is warm, crisp, and with a flat response that’s hard to find from gaming cans. You’ll certainly hear the details with these around your ears, and if you want to get granular you can use a control on the earcup to cycle between 4 EQ presets intended for different environments. The mic works wonderfully for such a small unit, too, producing a more full-bodied voice than most. In short: this is the full package. It’s pricey, but useful for gaming, music, cinema, and even editing or production.

A brilliant portable alternative to a gaming headset

If you don't want a traditional gaming headset, because it doesn't fit with the portability of your Switch console, then grab a pair of Turtle Beach Battle Buds. While they don't deliver superior audio, given they only have tiny 10mm drivers, they're rather good at what they do, and because the frequency response is quite limited you actually get a good balance of sound no matter what you're listening to. While most gaming headsets suffer when handling dialogue in games and TV, the Battle Buds deliver a nice, consistent sound.

Despite their size, the Battle Buds stay firmly in your ear, even with constant head movement, and they're comfy for at least an hour of play. The Battle Buds also include a tiny mic, if you want to chat while playing, and they come with a neat little carrying pouch. Crucially, all this kit will fit easily into the average Switch carry case, and because the pouch is a nice, soft material, it won't scratch your screen or mark it in any way. They're the perfect portable option for Switch, if sound quality isn't a huge concern.