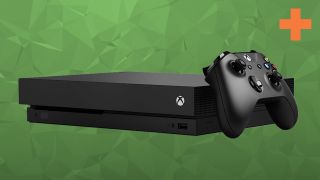 If you're on the lookout for Xbox One X deals, this is exactly where you need to be. Our team of bargain-hunters have rounded up the most tempting prices and discounts to help you save money on what Microsoft likes to call "the most powerful console in the world". All of these offers can be found below. We've got you covered for Xbox One accessories and cheap Xbox game deals too.

Xbox Live deals
If you want to play multiplayer, you need Xbox Live. These offers will get you the best possible deal. Don't miss our guide to Xbox Game Pass, either!

Not sure what the difference is between Xbox One X deals and the best Xbox One S bundles? On the face of it, they play all the same games. However, the X is the only Xbox capable of playing them in super-sharp 4K Ultra-HD. It also has 6 Teraflops of graphical power for improved visuals and 12GB of DDR4 RAM for superior load times. Yes, the S model is cheaper, but you're losing out on quite a few features to get that reduced price tag.

Although we're due to get the next-gen Xbox Project Scarlett late in 2020, it's also worth considering Xbox One X deals nonetheless. The Xbox Project Scarlett price is likely to be far higher at launch, and the X still has six years' worth of games to choose from. That's quite the advantage.

With that in mind, scroll down and you'll find of the best Xbox One X deals below. Happy shopping!

Xbox One X 1TB + Star Wars Jedi: Fallen Order + second wireless controller | $349 at Microsoft.com (save $209.99)
You can get your hands on a 4K-ready console with one of the best games of 2019 for far less with this deal.View Deal

Xbox One X 1TB Gears 5 bundle + second wireless controller | $349 at Microsoft.com (save $209.99)
Grab the world's most powerful console and some of its best games at a markedly lower price. A bargain.View Deal

Xbox One X 1TB + NBA 2K20 + second wireless controller | $349 at Microsoft.com (save $209.99)
A superb offer for any sports fan wanting to pick up the world's most powerful console for less.View Deal

Xbox One X 1TB + Forza Horizon 4 Lego Speed + second wireless controller | $349 at Microsoft.com (save $209.99)
This bundle is ideal for younger gamers, particularly with that extra controller for split-screen multiplayer.View Deal

1TB Xbox One X + Star Wars Jedi: Fallen Order | $499 on Amazon (pre-order, save at least $20)
This new Star Wars adventure is set shortly after the infamous Order 66 that wiped out the Jedi. It's up to you to fight back.View Deal

Upgrading from an older Xbox? Got some Xbox One games already or want the machine by itself? No problem. We've listed the best solo console deals here, and these are updated on a daily basis. Check back in every now and then for the lowest prices.