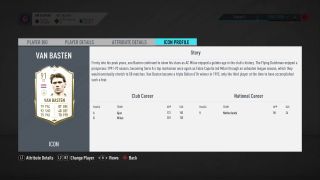 Holland legend Marco van Basten has been removed from FIFA 20 after using the Nazi term “Sieg Heil” on air. He made the comment during a Fox Sports TV broadcast following Ajax’s 4-1 win over Heracles in the Eredivisie last week.

Until further notice, van Basten’s cards will no longer be found in packs or FUT Draft, and Squad Building Challenges featuring the former Milan forward are also out of the question.

“We are aware of the recent comments made by Marco van Basten,” reads an official EA statement which currently appears when you open Ultimate Team. “We have an expectation that our commitment to quality and diversity is upheld across our game. As such, we will suspend Marco van Basten icon items from being available in Packs, SBCs and FUT Draft until further notice.”

Van Basten claims that his comment - made off camera on the network’s Eretribune show, but clearly picked up by studio mics - was intended to mock colleague Hans Kraay Jr, after he interviewed Heracles manager Frank Wormuth. "I didn’t mean to shock people, I just wanted to ridicule Hans' German, but I’m sorry,” he said after being suspended for a week by the American broadcaster.

Fox Sports described his comment as “stupid and inappropriate”, and his fee for the show was donated to a Dutch institute that promotes knowledge of World War II.

The 55-year-old’s three Icon cards are still available to buy and trade on the FIFA 20 transfer market, but we’ve made the call not to share prices in order to avoid players profiting from his comment and subsequent removal.

We’ll update this story if van Basten is eventually restored to the game.