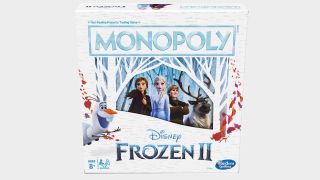 Craving a Cyber Monday deal you can’t afford to say “Let it Go” to? Look no further than this 50% discount on Monopoly: Frozen 2 edition, which allows you to conduct a capitalist conquest throughout the lands of Arendelle for just $9.99. It’s the classic board game you love featuring the characters from this year’s hottest animated Disney film, so it's a great excuse to gather 'round as a family and play something together over the holiday season. The addition of 'cool' (heh) metal figures based on the film's characters is another neat touch, making this the ideal board game for kids now that the sequel itself is in theatres. It's also an excellent impulse-purchase if you're stuck for ideas on a present.

This Frozen 2-themed edition of Monopoly is unique in that you don't buy up and pay tax on locations as you go around the board, but rather some of the best moments from the movies (much like the Friends edition of Monopoly that saw you buy episodes). It’s a little strange, we’ll admit, but then how else do you go about getting little ones invested within the wide world of property management? For the low price of $9.99 at Walmart, you can be skipping around the board and passing go as your favourite Frozen characters in no time. Because Monopoly is arguably one of the best board games of all time, we'll not complain at another excuse to break it out.

Monopoly: Frozen 2 Edition | Only $9.99 at Walmart (a $10 saving on its standard price)
All Frozen fans aged 8 and up can jump into this icier version of the timeless board game.View Deal

Playable characters include Elsa, Anna and Olaf (duh!), but then also slightly more obscure ones like the ever-lovable Sven. Another icy twist to this version is that you can freeze your board game rivals in place the moment they step onto a section you own. Simply draw a snowflake chance card and attach it to wherever you see fit. That certainly makes it one of the more attention-grabbing Cyber Monday board game deals thus far.

In need of more Cyber Monday game deals madness? Do check out the other offers happening from around the web:

Cyber Monday deals from across the web (US)