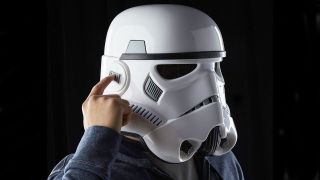 Look, you know you don't need it but when a wearable authentically movie accurate stormtrooper helmet WITH VOICE CHANGER drops $30 off the price, bringing an $80 collectible down to fifty bucks, it is a go. Repeat, no one can stop me, I need this, go, go go.

Star Wars The Black Series Imperial Stormtrooper Electronic Voice Changer Helmet $49.99 (save$30)
The Black Series is the high end of the Star Wars collectible options so this is a great looking prop meets toy that will look good and be great fun.

As it's part of the Black Series this voice changer helmet is better than the usual plastic toy. Okay, it's still plastic but this is "a premium roleplay item" to give you some idea of which end of the market it's aiming at.

Not only will it look great on a shelf and make all your friends envious, there's literally hours of fun to be had taking turns trying it on and pressing the voice changer button as you compete to repeat the best quotes. Worth noting as well that button turns the voice effect on and off so you don't actually have to hold it down to talk. And it does the 'kzzt' thing too!

If you're hear because you like Star Wars And if not, why are you here?), then check out our best Star Wars Jedi: Fallen Order Cyber Monday deals on PS4, Xbox One, and PC. And if nothing else takes your fancy then our Cyber Monday game deals should have something you like the look off.