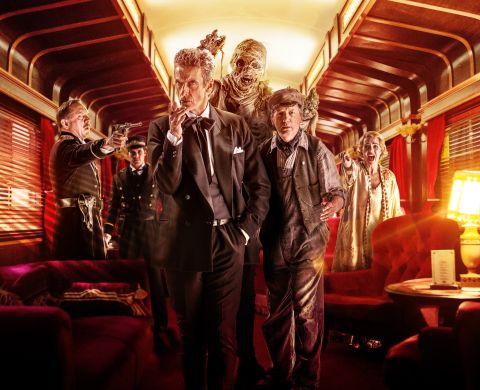 The whodunit is a well-established genre, but one which Doctor Who – with a few exceptions (such as “The Robots Of Death”, “Terror Of The Vervoids”, “The Unicorn And The Wasp”) – rarely makes use of. The series is more likely to produce a “whydunit”.

What’s a whydunit? Well, let’s define it as a story where the identity of the killer (or the nature of the threat) very quickly becomes apparent, and the only remaining mystery is motivation. Think of “The Curse Of The Black Spot” (sorry, it’ll only sting for a moment): a siren is terrorising a pirate ship; we see it “kill” again and again, then eventually discover it’s actually a spaceship’s emergency medical hologram. Think “The God Complex”: a minotaur stalks the corridors of a mysterious hotel where people encounter their deepest fears; turns out it’s actually an automated alien prison cell, floating through space.

“Mummy On The Orient Express” is a similar sort of tale, and unfortunately, a somewhat repetitious one. Creepy though the zombie-like mummy is, there are diminishing returns here; watching the Foretold stalk and kill begins to lose its appeal after about the third victim. What’s more, the answer eventually provided is a disappointment – particularly since malfunctioning technology (surely one of new Who’s most overused tropes) is behind it all yet again. The way the Doctor solves the problem is dressed up as Sherlockian deduction, but looks more like a huge imaginative leap.

That answer doesn’t seem to make any sense, either. Why would a “wounded soldier” from a society with such advanced tech be covered head to toe in old-fashioned bandages? Why would it kill the physically or psychologically damaged first? That’s the psychology of a hyena, not a soldier; wouldn’t it actually make more sense for a soldier to start by taking out those who present the greatest threat? Why claim one victim at a time, rather than take out as many people in the room as it can in one go? If it cares so much about that scroll-that’s-actually-a-flag, why not just take the damn thing? And why does it salute the Doctor, if it believes he’s a surrendering enemy combatant? With a whodunit, much of the pleasure resides in trying to deduce the identity of the killer. With a whydunit like this, the solution is so frustratingly improbable that you don’t have the slightest chance.

The Doctor mentions that Gus once rang the TARDIS to try and entice him on board; Matt Smith’s Doctor received a phone call about something “loose on the Orient Express, in space” back in 2010’s “The Big Bang”. But that was an Egyptian goddess, not a mummy.

The episode also rather wastes Clara, who spends much of her time stuck in a locked carriage. That might please those people carping that Clara is hogging the limelight too much this series (you’re wrong, by the way – she’s the best thing about it). Unfortunately, giving the Doctor more time front of stage merely gives him more opportunities to act like a cold-hearted, uncaring git, apparently unmoved by individual human deaths – a deeply unappealing characteristic of this incarnation already explored in “Into The Dalek”.

When Clara is on screen, the focus is often on whether this will be her last voyage with the Doctor. It makes good sense to show her thinking this through – frankly, a lot of people would have bailed on this grouch weeks ago – but since the production team haven’t a hope in hell of convincing us she might really quit mid-season, these scenes can seem like a waste of time. Still, top marks to the Beeb for trying to maintain some will-she-won’t-she mystery by not only excluding Clara from the publicity stills, but asking the press not to reveal that she features in the story. Shame whoever wrote the official episode summary beginning “The Doctor and Clara are on the most beautiful train in history…” (later hurriedly corrected) didn’t get the memo. Oops.

“Mummy On The Orient Express” isn’t a clunker. Impressively mounted, it features an effective monster, a decent midway-point twist, and some great gags (both verbal and visual – you’ve gotta love the Doctor’s cigarette case full of jelly babies). But as a first stab at Who by the talented Jamie Mathieson – the man behind so many strong episodes of Being Human – it’s a bit of a letdown. If it’s monster-loose-on-a-steam-train carnage you’re after, you’re probably better off watching 1972 film Horror Express. It’s mental, and it’s got Telly Savalas in it.

David Bamber (Captain Quell) is probably best known for his role as clergyman Mr Collins in the Colin Firth-starring BBC adaptation of Pride And Prejudice. Who fans may recognise Janet Henfrey (Mrs Pitt, the first victim) and Christopher Villiers (Professor Moorhouse) – in 1989 Henfrey played the god-fearing Miss Hardaker in “The Curse Of Fenric”, while a young Villiers jousted with the Master in 1983′s “The King’s Demons”. Oh, and in case you didn’t spot the credit, Gus the computer is voiced by John Sessions (who, incidentally, is one of many actors who auditioned for the role of the Eighth Doctor).

There’s some puzzling storytelling at one point. We see Clara and Maisie entering the “sarcophagus carriage” after the lock is smashed. When we next see them, three minutes later, Clara is fiddling with the lock on the other side. But it’s never actually spelled out that they’ve become locked in. Perhaps a longer, more explanatory sequence was shot, then edited down?

So who was responsible for assembling all the boffins on the train? Missy? Perhaps. It doesn’t really seem like her MO, though. Come to think of it, it seems more like The Rani’s (see 1987′s “Time And The Rani”)…

If you dug that Foxes cover of Queen’s “Don’t Stop Me Now” we recommend checking out the work of French band Nouvelle Vague – they specialise in this kind of thing.

The Doctor: "Are you my mummy?"

Doctor Who airs on Saturday nights on BBC One in the UK and BBC America in the US.